Wicker is a hand woven fiber, formed into a rigid material,usually used for baskets or furniture. Wicker is made of plant origin. Materials used can be any part of a plant, such as the cores of cane or  rattan stalks or whole thickness of plants, as with willow switches. Other popular materials include reeds and bamboo.
Often a frame is made of stiffer materials, after which more plant material is used to fill in the frame. Wicker is light,yet sturdy,making it suitable for furniture that will be moved often. It is often used for patio and porch furniture.
Wicker furniture has been documented as far back as ancient Egypt, and wicker baskets have been found in the ruins of Pompii It  has been suggested  that the extensive use of wicker objects in the Iron Age had a influence on the  design of patterns used in Celtic Art.In recent times, its aesthetic was influenced heavily by the Arts and Crafts movement, at the turn of the 20th century.The oldest and most prominent North American manufacturer of wicker  was Heywood-Wakefield of Mass.
In the  by-gone  Victorian  era,the Golden Age of American Antique wicker furniture , the designers and the craftsman of the those years, was who skillfully created the imaginative and romantic pieces of wicker furniture  that  are being recongnized by leading authorities and museums to have contributed significantly to the American decorative Arts of 1870-1930.These makers were , Heywood Brothers and the  Wakefield Brothers that finally joined together to become The  Heywood -Wakefield Company. 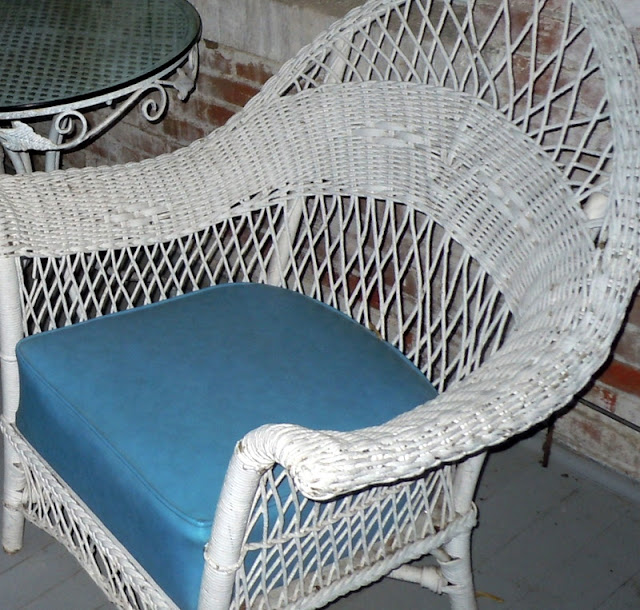 There are two types of wicker available, natural or synthetic. Natural is well known for it's strength and  durability and is loved for it's beauty and comfort, although requires  some up keep, to keep it in good condition. Synthetic types include paper wrapped high tensile wire(Lloyd Loom)   a process  patented in early 1900's. And Plastic or resin -usually  for out door use. This is what we see most of on todays market.
Victorian era was when wicker furniture was first introduced and this type of furniture is still much loved in this day and age. Some pieces have the appearance of having been knitted by way of a very big pair of needles. Wicker harmonizes with just about every decor.
Wicker was one of the first natural materials to be used for furniture. Egypt,Rome and Europe, as international sea traders, carried wicker wares to Great Britain and finally America. From the classical pieces of ancient Egypt to Modern day outside furniture , America-wicker furniture has survived and flourished through centuries  and many cultures. By the  19th century,Victorian era in England, wicker had become an important element for outdoor and indoor furniture. Wicker became popular for use in both the home and the garden. As it's simplicity and flexibilty lent itself toward a variety of different furniture styles and designs. While the first wicker furniture came to America with travelers on the Mayflower-it would not experience widespread popularity in the New World until the mid-19 century. Rattan, the most common material for wicker furniture ,  was originally used  to hold freight on ships, traveling from Asia. In 1850 Cyrus Wakefield discovered a large pile of rattan on the shipping docks in Boston and became fascinated by the material. He began his own rattan importing company in Boston  and making his own line of wicker furniture from rattan And he became the industry leader in wicker, at that time.  In 1869 some one invented a loom that could automatically weave wicker, until then all wicker was made by hand, and nothing has been the same since. 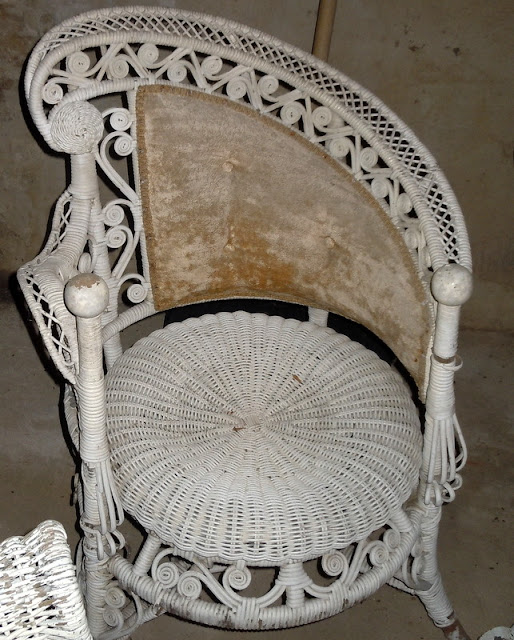 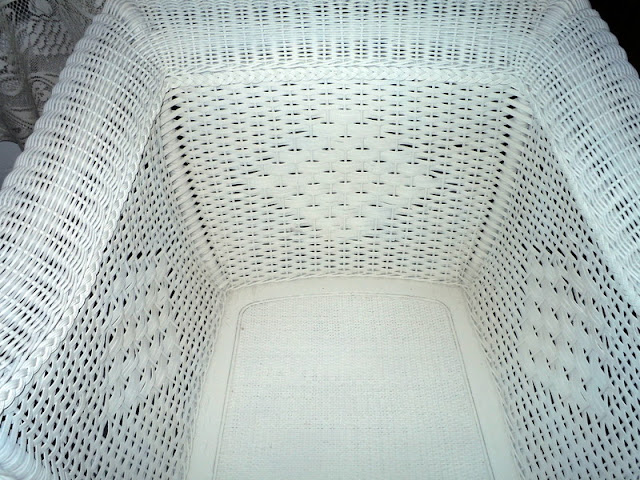 Antique wicker products are highly sought after by todays collectors. Reproductions have been made for years. It is not hard to soon learn to tell the old from the newer. The old, if cared for properly will just seem to last for ever. The new wicker, never seems to hold paint and  comes apart when left in the  elements. The new wicker makers never seem to get  it just right. Where one part look pretty good the other parts are out  of scale or over or under done.
I have had a love affair with  antique wicker furniture for many years. I have always been drawn to the fancy Victorian over the plainer. I usually have a mixture of both, as the plain seems to be more durable , while the Victorian  can be rather fragile.I have 5 porches full now at,My Old Historic House, my bed room is full and so is the basement. I can not seem to resist a  piece that is in need of repair. I keep telling my self, I will get it done some day and some day never seems to come. I had a lot of my beautiful, fancy, Victorian wicker damaged during the 2008 big flood that took place at my house which is just a few 100 feet from the Mississippi River. I had it on the front porch and while it was safe from the rising river it was not safe from the workers who helped out. People had  to spend the night on the porch to watch the pumps and I am afraid the hard use took its tole on the  wicker. I should have moved it, but during the panic and excitement it slipped my mind. Now it too lives in the graveyard of wicker in my basement. When I finished my bed room, the last room  I had to do in my house, I had some stored there and it looked so pretty against the dark olive green walls that I just left it there. I picked out some of my favorites and clean them up and gave them a coat of fresh white paint and I really like it there.I have all the wicker from my front porch in storage at the moment as we are now dealing with another possible flood. A hard lesson, well learned. 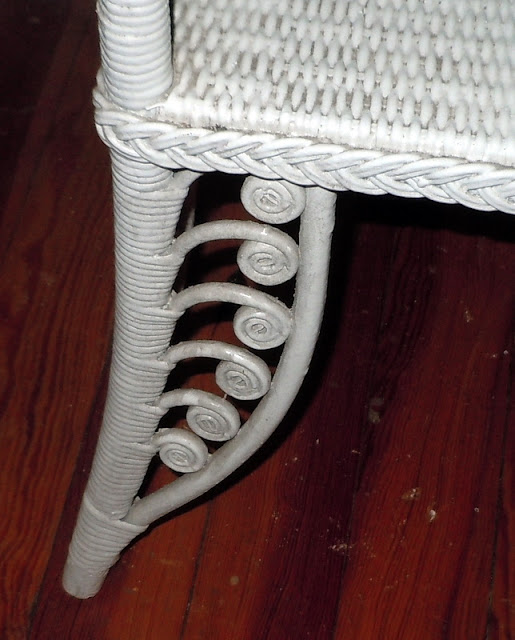 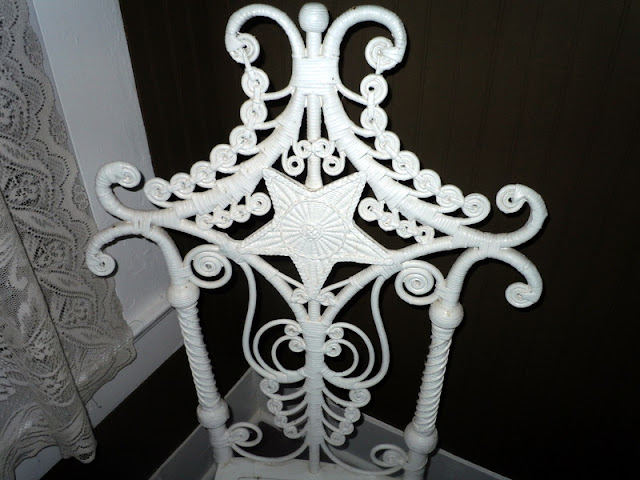 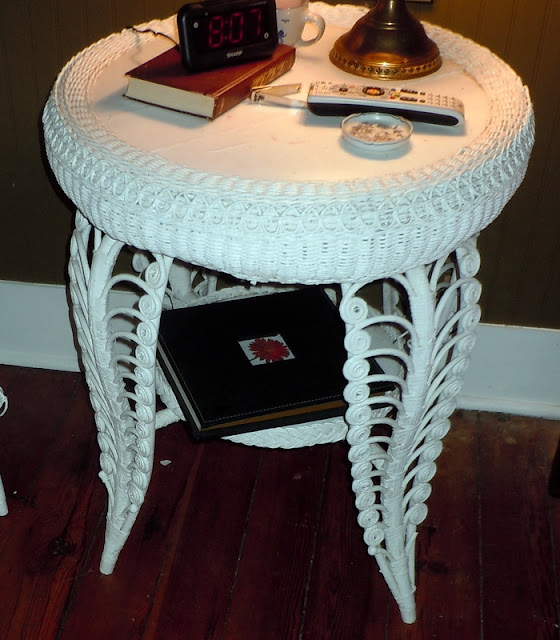 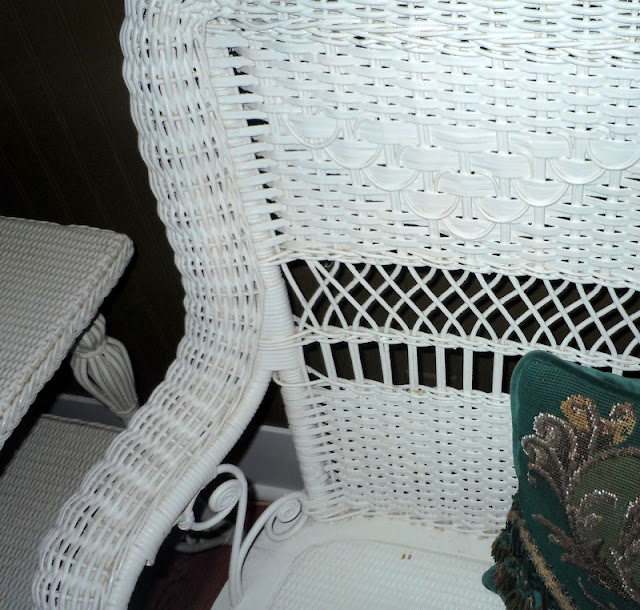 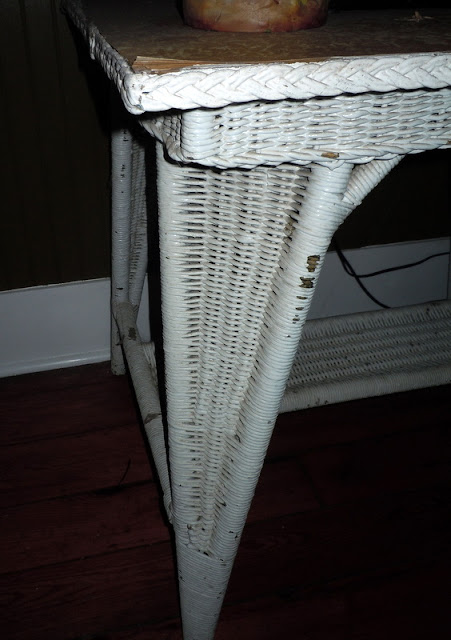 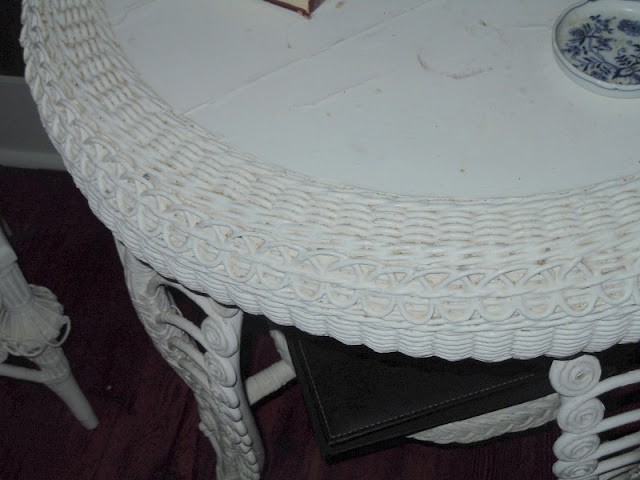 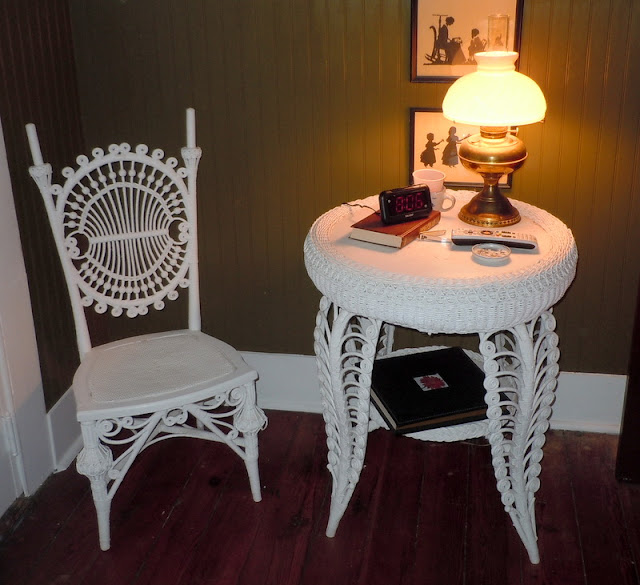 Wicker takes some care. Every year in the spring, I give it a good washing. About every 2 or 3 years it needs to have a coat of fresh paint.Some people spray, I perfer to hand brush. If it ever starts pealing it is very hard to control and a lot of scapping and sanding has to be done. There are a lot of people out there that repair and restore old wicker. It is an art and takes patients and time. Supplies can be purchased for, "do -it- your- selfers", like me and they are not expensive. Sheet caned seats and card board pressed seat are available for missing bottoms. Mostly it takes patients.
I hope you enjoy my Victorian wicker, maybe someday you can come by and take a tour. I will get you a glass of sweet tea and you can set a spell on the porches in some of the wicker and Sissy Dog will meet you with a jump and and a kiss. Happy Spring! 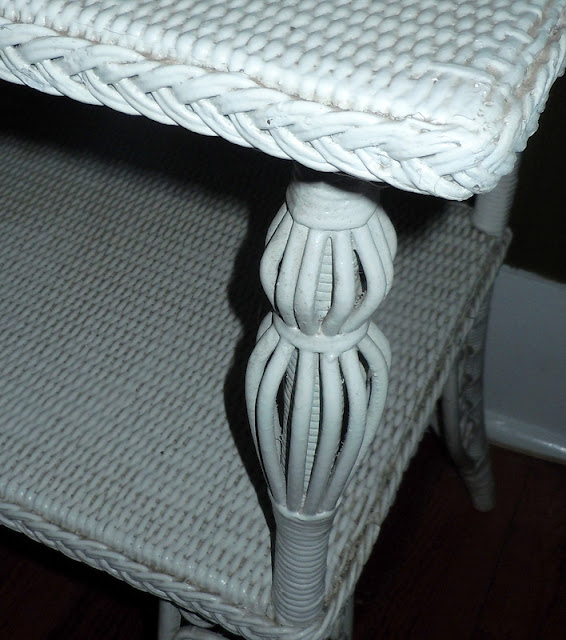 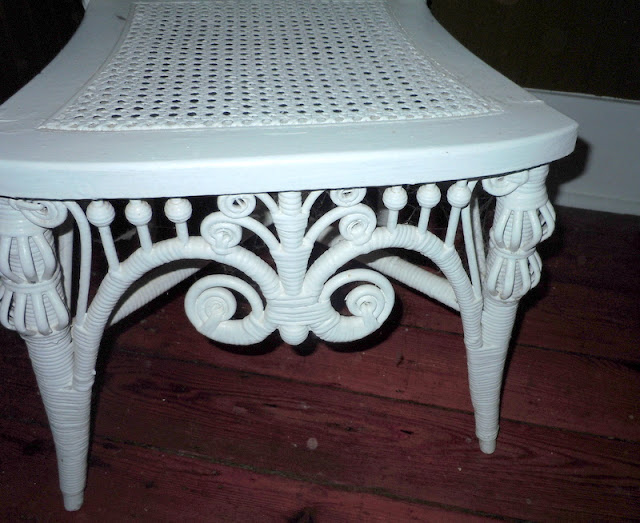 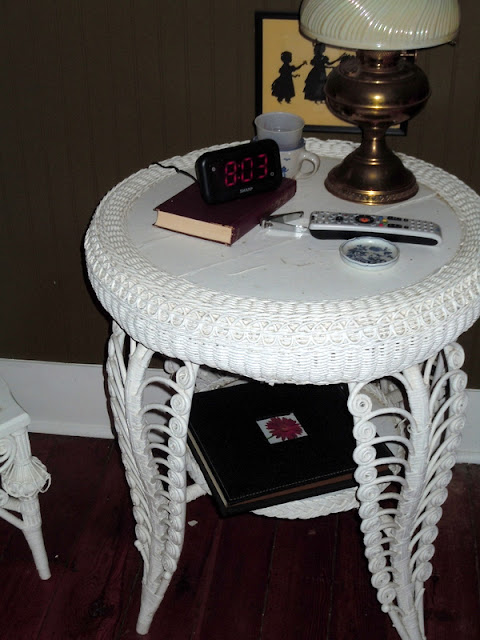 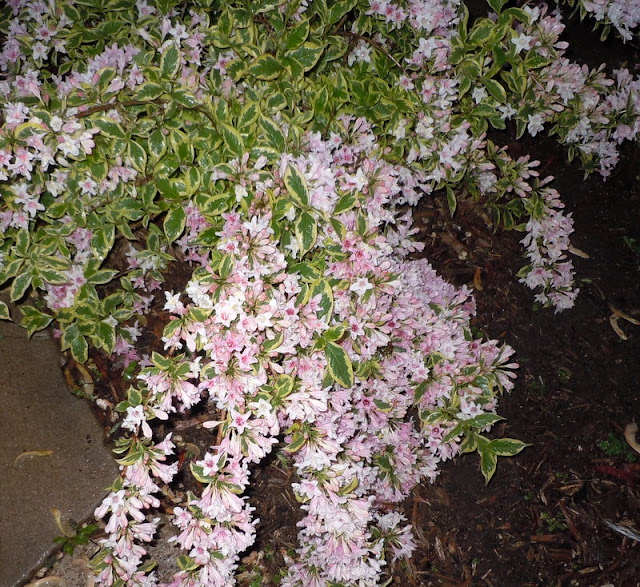 Posted by Richard Cottrell at 8:56 AM 18 comments: