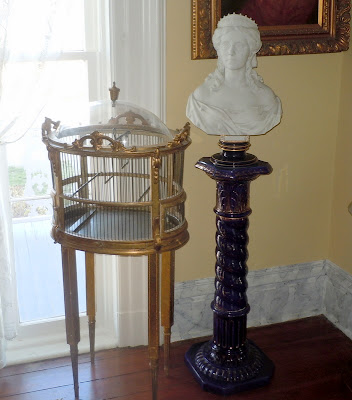 Birdcages have inspired artisans and delighted bird keepers for centuries. There is something about the requisite form,the necessary aireness of bird cages,that gives them essential beauty. The history of the
bird cage is tied to the adoption of birds as pets. Birds were caged for their beauty and mystery nearly four centuries ago in ancient Egypt. Doves and parrots were favorites of the Egyptians and are depicted often in hieroglyphics. Original cages were crude and made  perhaps of  wooden twigs,rope mesh,.reed or bamboo. Some say that Alexander the Great was given a parakeet by one of his generals and the Alexandrine Parakeet was named in his honor. Ancient Romans kept and held birds as well and it was considered the duty of a slave to care for domesticated animals. By the Middle Ages only the wealthy kept caged birds.


When Western  traders brought back spices and textiles from the East, they also brought the exotic birds as pets.Birds were much beloved pets in the American Colonies. Bamboo and wooden cages were seen in many kitchens in the New World. Often hung by an open window.
Through the Victorians were the first bird cage collectors,the hobby of bird keeping and the craft of cage making are probably as old as civilization itself.We know that the ancient Greeks keep sparrows,magpies and starlings as house pets and during the heyday of the Roman Senate,talking parrots were all the rage. The Chinese,whose birdcages remain among the most beautiful ever created, were making cages as early as the 3rd century. 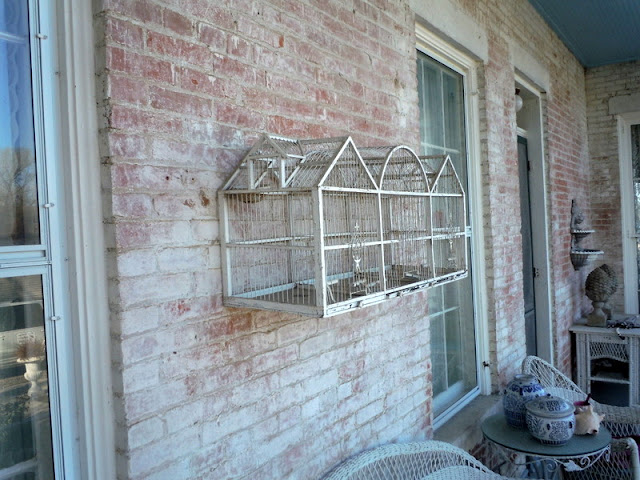 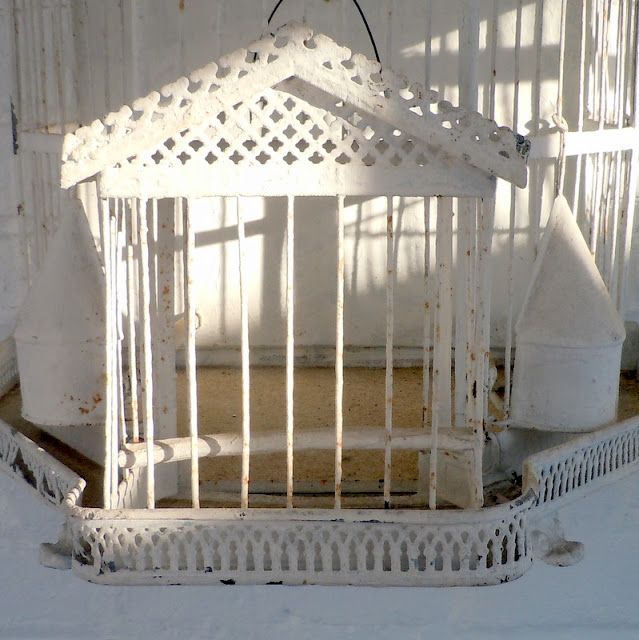 The French too, were establishing themselves as cage-makers-indeed. France was the only nation to boast a Royal chartered cage-making guild.But it wasn't until the 18th century that the art of cage making saw its first inflorescence.Suddenly no great house could be constructed without an aviary and no man or woman of fashion could resist the temptation of an ornately carved cage. Both Louis XV and XVI, commissioned elaborate cages that were placed among the orange trees in the gardens of Versailles.
For the first time in history,the cage itself began to take  precedence over the bird inside..  By the 19th century,the bird cage had become almost an essential furnishing in well-to-do homes,across Europe. Under Napoleon III,the French produced birdcages that were wonders of miniature architecture, and the rest of Europe fallowed suit. Behind turreted walls and balustered windows,it was sometimes nearly impossible to spot the birds inside. But the cages were glorious The English took the mania for birdcages to new heights. By  centurys end,no middle class English parlor was with out it's pet bird and in the houses of the wealthy an extravagant birdcage was likely to be the centerpiece of the drawing room.19th century Americans were equally enamored of birdcages,which replicated everything from Native American homes to sailing vessels. 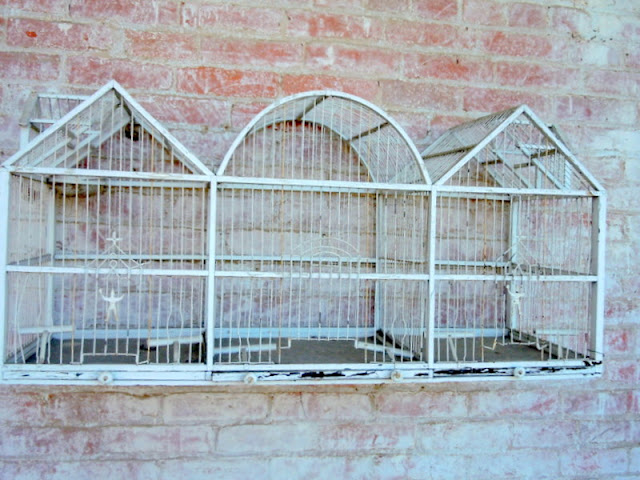 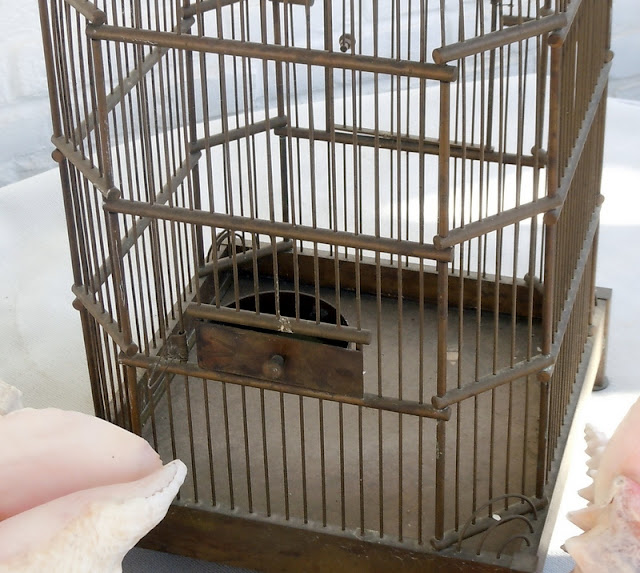 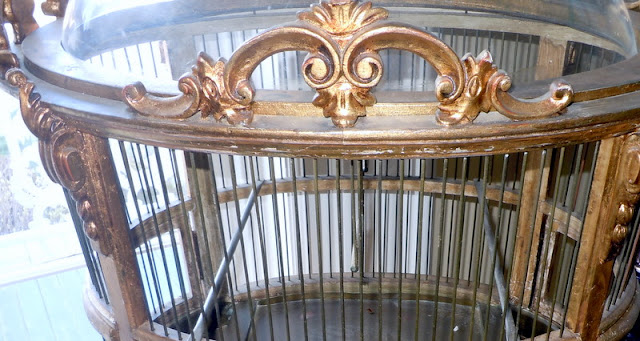 There is something very  appealing about having a birdcage around the house. Perhaps it's the classic beauty of a richly embellished 19th century mahogany dome or fantasy of a wood and wire Swiss Chalet.or it might be the soft patina of weathered paint on a tin cage. Today most bird cage collectors are not lovers of caged birds. They just like the cage as a decorative element around the home.No space is off limit. Some bird cages are found in the most formal spaces while others decorate a sun room or a back porch. Magazines of  all types love to feature them . The Shabby Chic look has brought the art of bird cage collecting back in strong force. The addition to any room of a bird cage is sure to bring a smile.
I have had a love affair with bird cages for as long as I can remember. I never knew why,but it has always been there. Years ago my house was on a house tour and I had several bird cages on the wall in a powder room. One of the people who took the tour made a remark that the cages in the powder room were  the high light of her tour. That person and I have since then become best friends. We both love bird cages and have then in our shops and homes for years. Both of us have shipped them home from New York and carried them around at flea markets. It is a problem, but a good problem. I sell her one, buy it back in a few months. She sells me one and I sell it back to her at another date. Whats that all about??? I bought a big very expensive bird cage in St.Louis when I first opened my shop there. I wanted to show off with it. I put it in the shop with a big price tag and it sold. I never got over it. Latter the person that bought it was moving and wanted to sell it, so I bought it back and put it in the shop with even a higher price. Well- it sold again. I still say to this day, why did I ever sell that cage?Sometimes we just have to pay the bills.And ,I did and that's that! 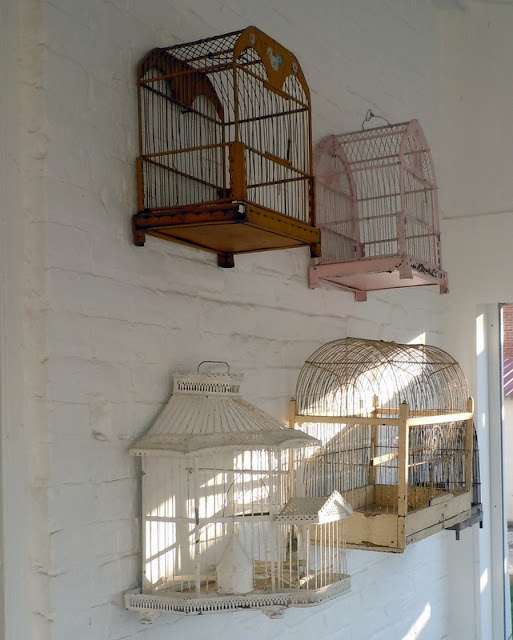 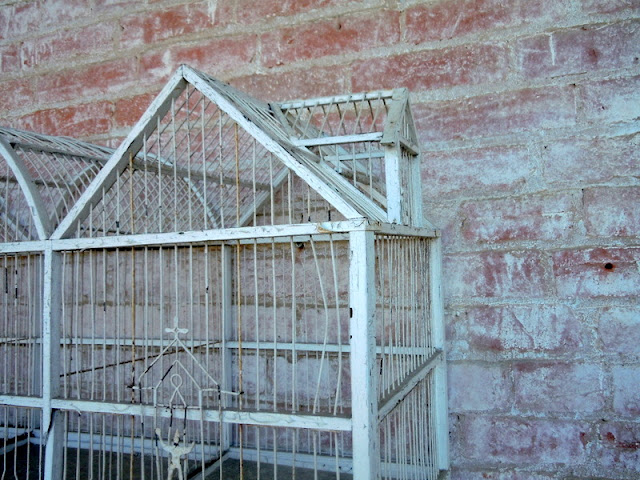 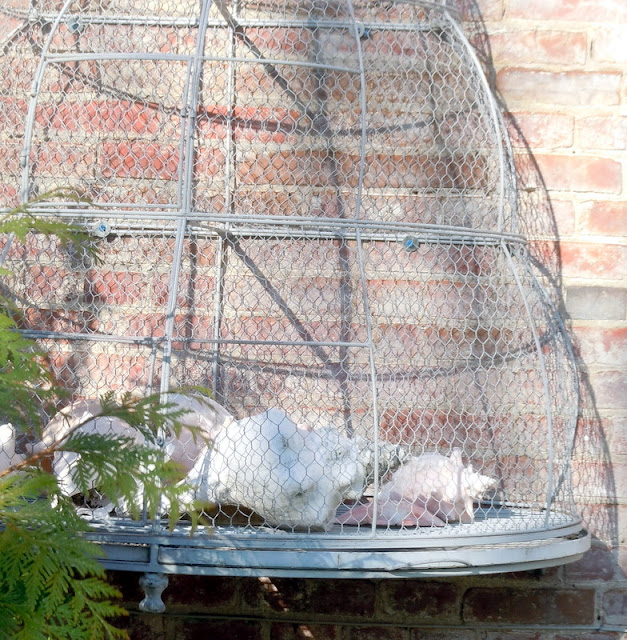 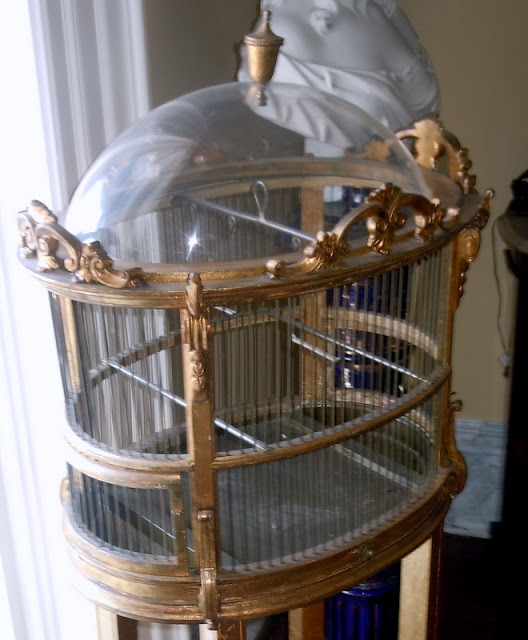 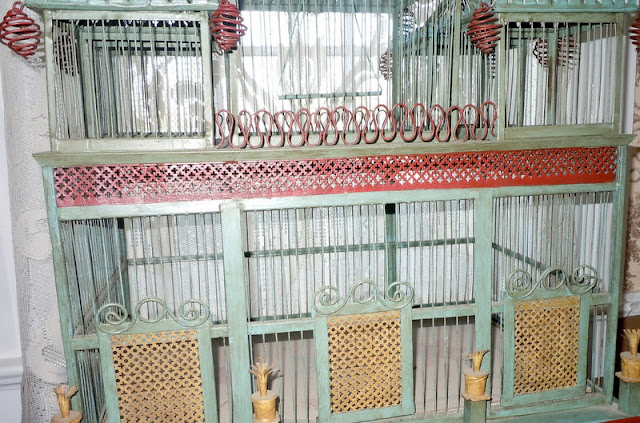 I have a few bird cages at My Old Historic House that I would like to share with you all today. They range in style from a shabby tin to a fancy gold leaf French. I hope you enjoy them as much as I do.  Today pictures are not the best. I  am sorry, but it is one of those days where the camera wins and I loose. I promise to do better next time. Come by  anytime for a tour, I will leave the light on and Sissy Dog will meet you with a jump and a Kiss.
I have cages for sale at  my ETSY shop.  Just click here. www.richadsgreatstuff.etsy.com    Also more in my store, if interested just email me and I will send pictures. cottrellprissy@aol.com Feel free to buy them and if you get tired of them I will always buy them back. Just can't help myself.
Have a beautiful day.Richard and Sissy Dog 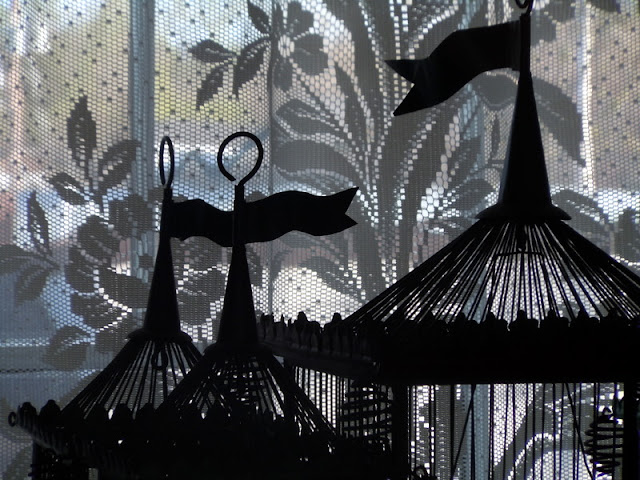 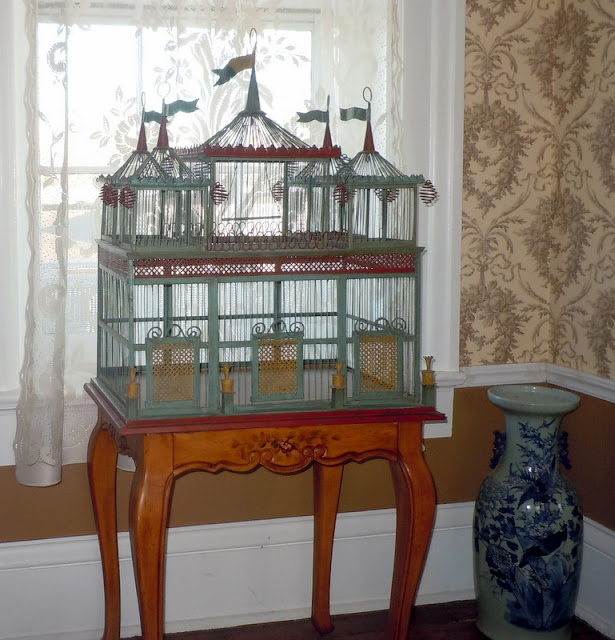 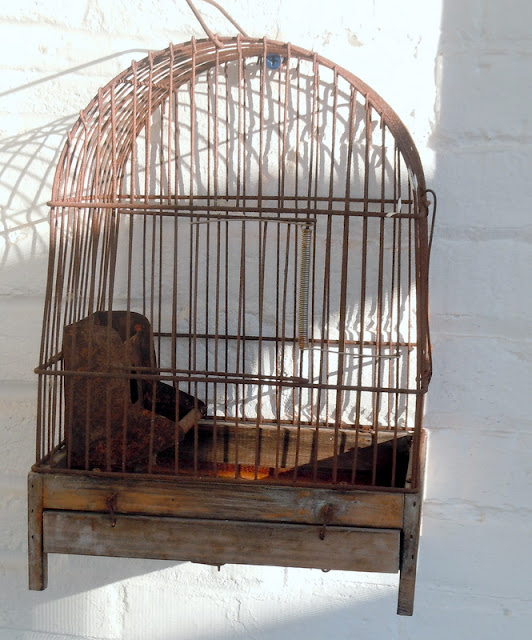 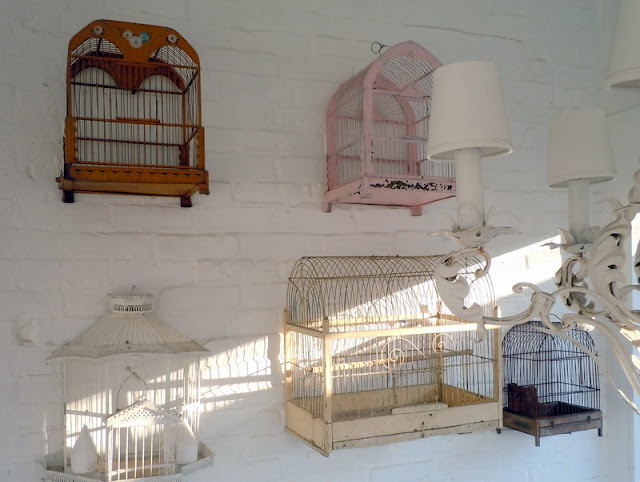 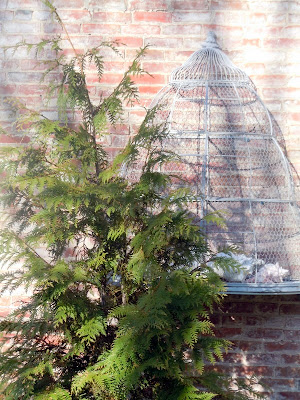 Posted by Richard Cottrell at 9:11 AM 27 comments: