I promise I will not do every new blog in 2012 about my new doll house project.  If you really knew me, you would know that I tend to get carried away when working on a project. I guess it is the Leo in me, as I have always been this way. When I start a new project, I am so driven that nothing else seems to matter. I am so glad I jumped in and bought this little jewel. It was  a very hard decision, as I knew it meant lots of work, devotion and cash. Yes, my friend Blossom was so right when she said, " a doll house is like a real house, it never stops." I think she was on to something there. I have promised myself I will try and hold it down, who knows what will really happen.
The doll house is in the style of a 1850-1870- Second Empire structure. This type of architecture became popular in America a little latter than it did in France. During the reign of Napoleon III , this was the choice style in France.  Soon to follow was American , architects  began to design homes in this popular style. Things that make this style are: tall mansard roofs, they were designed to create a sense of height.Other features were: dormers, wide eves with elaborate cornices and brackets. Balconies, bay windows, slate roofs,cupolas, classical pediments, tall windows,arched windows,double front doors and small entrance  porches.
Is it Second Empire or Italianate? This is a question that is often asked of this style home. Both styles tend to be square in shape. Both have decorative brackets and single story front porches. Italianate does not have the mansard roof. This roof is the one major difference in the Second Empire and the Italianate styles. Sometimes the Second Empire home is a combination of Italianate, Second Empire and Gothic styles. My doll house has a Gothic styled stair  case.
Doing the doll house is not unlike doing a real house. Decisions have to be made as to colors and patterns. In doing some research I found that pink was a favorite color for Second Empire Homes in the late 1800's. It seems paint was a fairly new thing, especially colors, so people who could afford it, wanted to show off, and bright colors were often used. This was not a hard decision as I have always wanted a pink house. The big decision was the choice of pink. I wanted something strong, yet not over powering. This rich shade is what I ended up with. It's name is  Raspberry Swirl. The wooded roof shingles did not appeal to me, as the usual material used for roofs on the second Empire House was slate. I thought that if it was painted it would look more like slate. I chose a Hunter green as the roof color.
I spent hours doing research on the computer and I found this wonderful site. www.dollhousecollectables.com. They have all periods of reproduction wallpaper and carpets.  I am starting with a room I am dubbing the, Dining Room.The paper and carpet I picked are both perfect for this style of house. I have chosen to do the wall to wall carpet on the entire first floor and on all three halls. Wall to wall carpet was very much in vogue in this period. It was woven in 30 inch strips, sewn together  and stretched wall to wall. Hard wood floors are a 20th century invention.Mostly soft pine sub floors were used in construction  of homes of this period. The carpet I  chose is named, "Empire". It is a very bright red and gold, large pattern wall to wall. 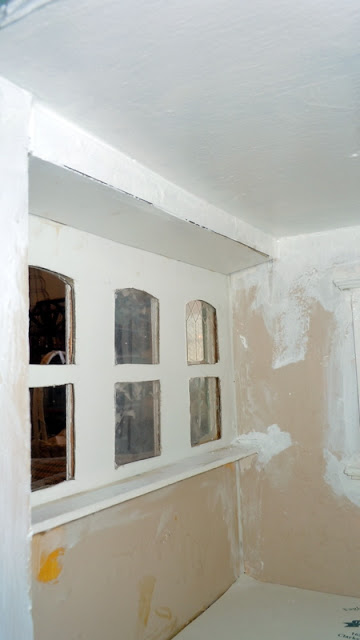 I can just see this in Napoleons drawing room. The wallpaper is also a bright red and gold. Both the wallpaper and the carpet are a perfect one inch to one foot scale, making them perfect for my project.
After painting, caulking, replacing wood work, I am ready to install the carpet and wallpaper as soon as it arrives. I wish it was here right now. I have taken the time to make a pattern out of white computer paper for the floor and back wall. This will save me from making a mistake when cutting expensive period reproduction wallpaper and carpet. When they arrive I can trace the patterns, fit them, and then glue them in place.
I am sending in this blog, pictures of my progress with the exterior painting. Also the readied dining room. Since I do not have the carpet and paper, I am sending photo's from the web site.
I hope you enjoy this post about the progress of my Victorian Second Empire Styles doll house. Come by anytime for a real tour. I will leave the lights on and Sissy Dog will always meet you with a jump and a kiss. 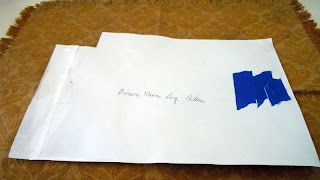 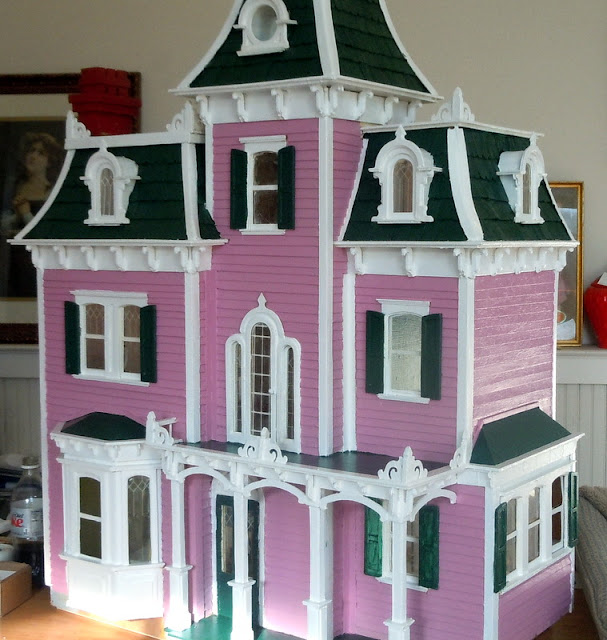 Posted by Richard Cottrell at 9:42 AM 50 comments: