﻿
﻿
I have these pieces of Old Paris porcelain for sale in my Antique/Gift Shop in Clarksville,Missouri. My shop is only a block  from ,My Old Historic House, AKA ,The 1845 Historic Elgin / Cottrell House. Clarksville is about 70 miles from St.Louis. It is a small  town on the banks of the Mississippi River. We are one of the few towns left, that the main street ,still faces the river. The shops of Clarksville are mostly Artist and Antique Dealers. We are a close  group and work hard to promote or little town. Be sure and visit us at http://www.clarksvillemo.us/. If you are interested  in the Old Paris give me a call. 573-242-9688
Also visit on on line shop at   http://www.richadsgreatstuff.etsy.com/
Posted by Richard Cottrell at 2:57 PM 1 comment:

Old Paris porcelain, or as the French say, Vieux Paris, refers not to a single Manufacturer, but to more than thirty porcelian sources, based with in the city of Paris, between the mid 1700's until around 1870, at the end of the Second Empire.The term was not actually used until the latter part of that period.
The various Paris Artisans, mostly situated in the northeast side of Paris,housed their skills in a hury or went out of business. At the outset, they had to compete with King Louis XV's own Royal Manufactory at Sevres, just 18 miles to the south-west of the city. Old Paris manufactures catered more quickly to changing styles and customs. By the turn of the nineteenth century,nearly all Old Paris porcelain was the hard paste variety. 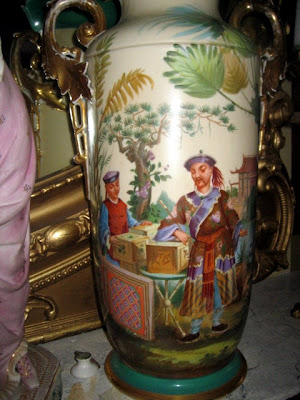 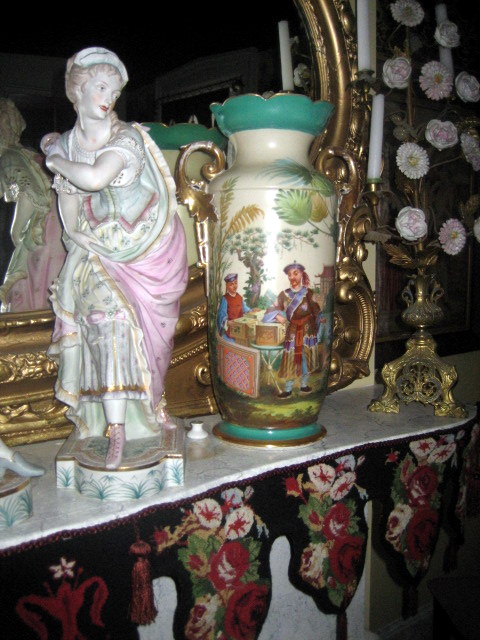 No mark ever came to synonymous with Old Paris china. Around 70 % of the Old Paris production during its era had no mark at all. Much of the blanks or "white ware" were produced by Limoge or Sevres. The Old Paris producers job, was strickly to act as decorators. But magnificent works came from these people. Style from Neo- Classical, Rococo Revival to Renaissance Revival.
With the sensitivity to changing times, the various exponents of Old Paris porcelain are among the finest European porcelain produced of that time.
Some antique dealers and colectors do not consider Old Paris to be so fine. Especially when they compare it to Meissen, Sevres or KPM. But, I for one, love it as much, or not more. The artist who did the decorating of Old Paris were very talented. They knew how to paint, and there flowers are my favorite.
Old Paris porcelains have a historical Rococo Revival style and are quite popular around the world. Such porcelains are particulary popular in the American South, with large collections of Old Paris in the Antebellum great houses in the lower Mississippi River valley.
When porcelain competetion picked up and new innovative Old Paris products were being produced by numerous factories in and around Paris, manufactures were forced to bring the prices down and the quality up in order to gain a fair share of the market.The range of product widen and so did the designs and variety, hence giving the masses a wide spectrum of choices in Old Paris. 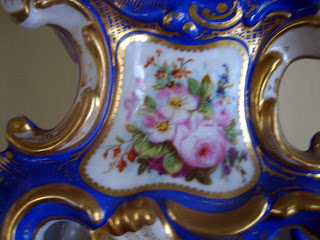 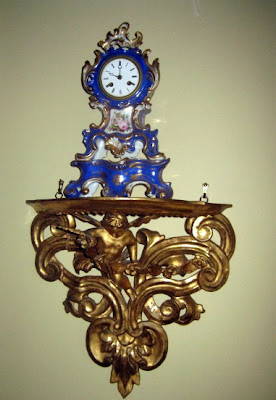 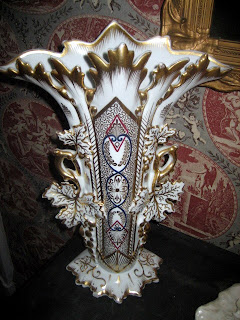 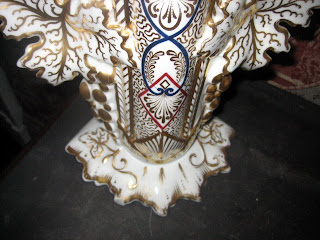 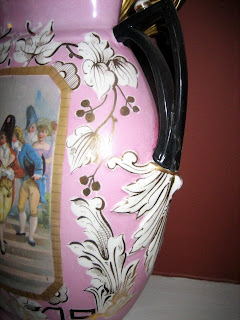 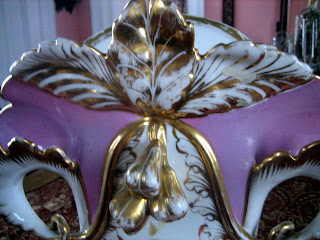 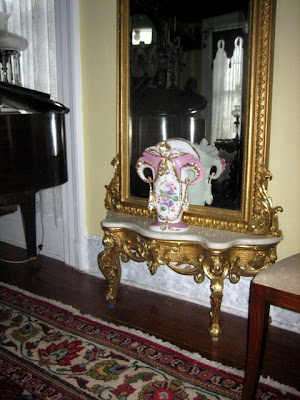 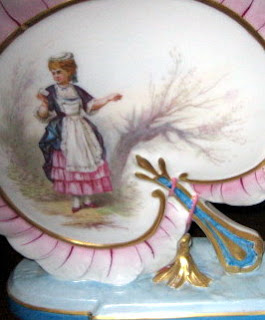 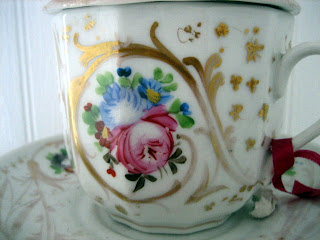 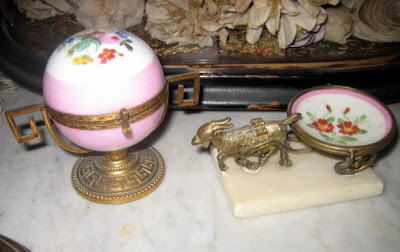 Great amounts of Old Paris was produced for the American market. Often people taking the "grand tour", shipped many of these pieces back to America. Soon American merchants, were having crates brought in for sale, here in the stores, of Americas large cities.
I love the Rococo style. The Neo- Classical is far more rare and valuable.But the Rococo is loud,bright and really stands out. I have always been attracted to tasteful gaudy. I have always loved Old Paris and only regret that I can not afford more pieces. Once in awhile, I find something wonderful, that is affordable, but usually the prices are over my head. So, I am gratefull, for the pieces I have. Small chips and cracks, never  bother me, when it comes to Old Paris. I just look the other way when it comes to these monor flaws. It is more affordable in the East and Mid West, than it is in the South. Southern people love their Old Paris.One of the most beautiful sets of Old Paris dinner ware is in a home in Natchez, Mississippi. After seeing it, I fell in lust.
I hope you enjoy seeing my, Old Paris, as much, as I enjoy sharing it with you.  I have some pieces for sale in my shop. Richard's Great Stuff in Clarksville, Mo. If you have any interest just call me or email. 573- 242 -9688. cottrellprissy@aol.com
If you would like to know more about my little town, Clarksville,Mo., stop by for a visit. http://www.clarksvillemo.us/
If you would like to check  out my own line shop, click here. http://www.richadsgreatstuff.etsy.com/
Posted by Richard Cottrell at 10:13 AM 8 comments:

Snow at My Old Historic House 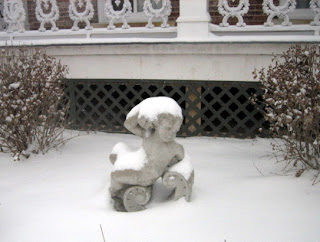 Posted by Richard Cottrell at 8:58 AM 6 comments: