Meet Me in St.Louis,Louis, Meet Me at the Fair. 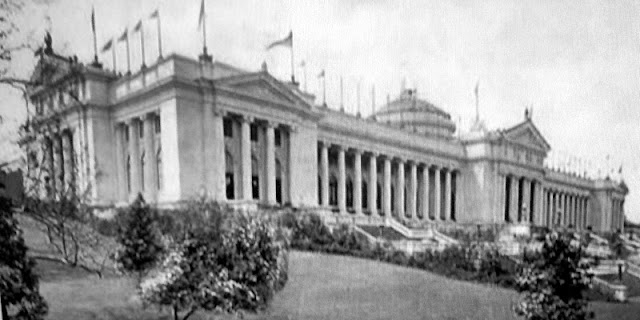 The 1904, Louisiana Purchase Exposition, informally known as the St.Louis Worlds Fair,. was an international exposition held in St.Louis,Mo, United States, in 1904. St.Louis hosted a major fair. One that has not been equaled today. The fair celebrated the centennial of the Louisiana Purchase of 1803, one year late. It was delayed one year to allow for full scale participation by more States and Countries. The Fair opened April 30,1904 and closed December 1,1904.
The fairs 1,200 acre site, designed by George Kesler was located at the present day grounds of Forest Park,the second largest city park in the world, New York Central park being the largest, and Washington University.This was  the largest Worlds Fair to date. There were over 1500 buildings, connected by some 75 miles of roads and walkways. The Palace of Agriculture alone covered some 20 acres,at the time, one of the largest buildings ever made. All the buildings, except for a few, were temporary and were made of wood and plaster.Only 3 are still standing today.Exhibits were staged by 62 foreign nations, the United States and 43 of the then 45 US states. There was also over 50 concession-type amusements found on ."The Pike", that provided educational and scientific displays, from distant and foreign lands and pure entertainment. It has been reported that 19,694,855 people attended that fair.A fast number, when you think that the main transportation at that time was still by horse and buggy.
A number of foods are claimed to have been invented at this fair. The most popular is the ice cream cone. The story goes, that they ran out of china bowls to serve the ice cream in, and some one grabbed a waffle and rolled it up ,and served the ice cream it it, the rest is history. Other claims are more dubious, including the hamburger and hot dog, peanut butter, ice tea, Dr. pepper,cotton candy,doughnut  and puffed wheat.
The fair inspired the song ,movie and Broadway Musical, Meet me in St.Louis, Louis.All of which were major hits and remain as favorites to lots of us today..
The Fair hosted the 1904 Summer Olympic games, the first ones ever to be held in the United States.
Important visitors to the Fair included: John Philip Sousa, who performed on opening day. Thomas Edison, who flipped the switch, to  light the first ever World's Fair in history ,to be lite with electric lights. Theodore Roosevelt opened the fair by telegram and made an appearance after his re- election  that year. Scott Joplin performed  his now famous, Ragtime. Helen Keller gave a lecture in the main auditorium. Geronimo was displayed in a teepee      David Rowland Francis was the 27th Governor of Missouri, Mayor of St,Louis, US Secretary  of the Interior, US Ambassador to Russia  and President of the Louisiana Purchase Exposition. He was the biggest promoter of the fair and is rumored to have been the force behind the fairs success. He personally gave 100 acres of land to the city of St.Louis as part of the fair. This land is now a park and bears his name. "Francis Park."
Now to quote the words of Dorothy,to Rose, on, The Golden Girls,'What the hell has any of this got to do with, My Old Historic House.?" Well David Rowland Francis, Great Grand Son was a friend and neighbor of mine. He and his family had a farm, with a  weekend home, next to the farm where I grew up. Dover,Mo. has now a population of 9. Our farms were connected and I spent many summers making some spending money, mowing the Francis yard and tending the flowers. There children, David and Diana, both went to the same public school that I attended. Diana is still a close friend and is my attorney, she lives in St.Louis. Little David has moved on and I am not sure as to what he is doing these days. In 1989, Big David died and the family sold the farm.There was a public auction and I bought several items. Two of them I am highlighting in today's blog. One is a French, gold gilt love seat, from the French World's Fair  Display. There were several pieces to this set, and most of them are now in the Missouri Governors Mansion  in Jefferson City,Mo. They are in the the third floor ball room.  The love seat, I have, was kept by the Francis family and used at there country home. The other is a 5 foot tall , Temple Vase from the Chinese display. This vase again was saved by the Francis family and used in there country home. I bought both pieces at the Francis auction and have held onto them for all these years. They are both in my entrance hall. They are great reminders of a great fair and a great Missouri family. I am very proud of them.
I hope you have enjoyed this little journey, back in time,  to the 1904 Worlds Fair. And most of all,my two wonderful pieces from that fair. Please come by anytime for a tour to see these two in person. I will leave the lights on and Sissy Dog will always meet you with a jump and a kiss. 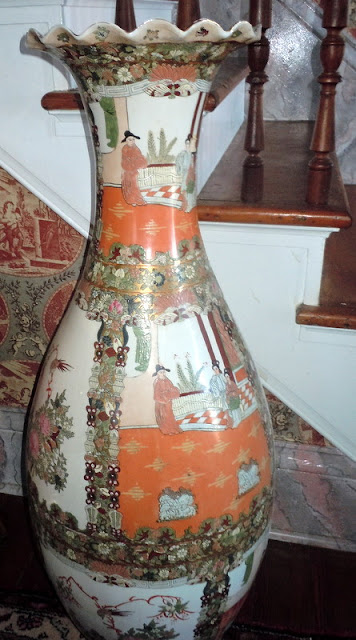 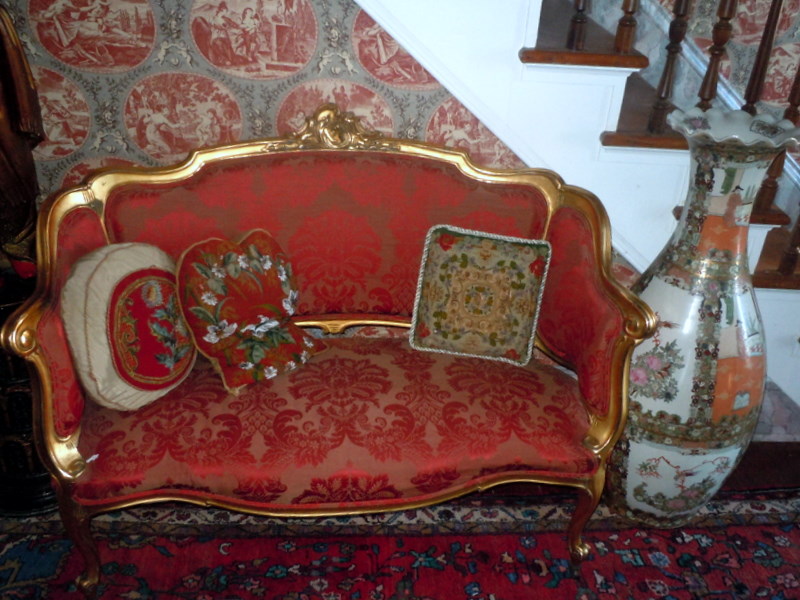 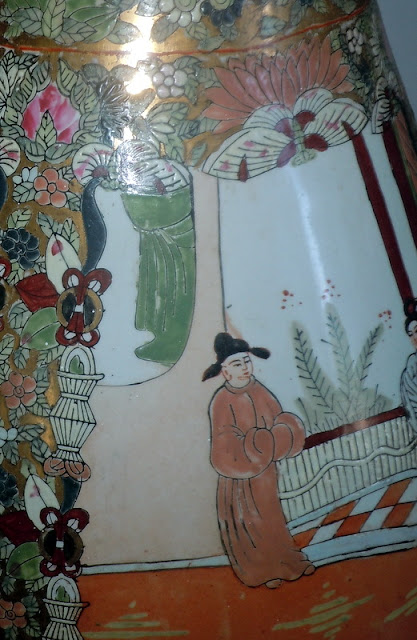 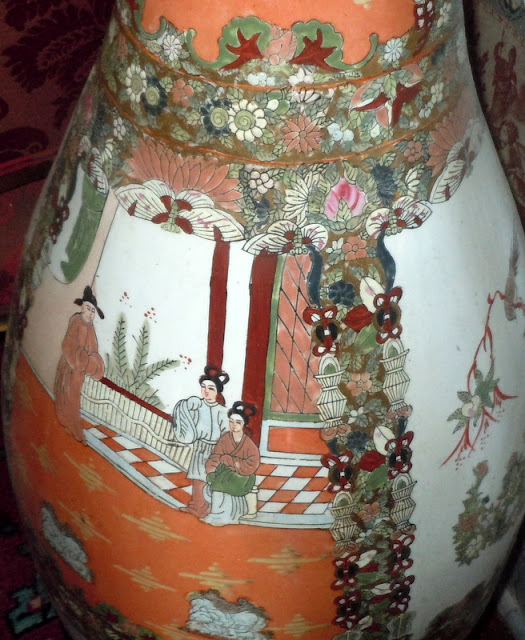 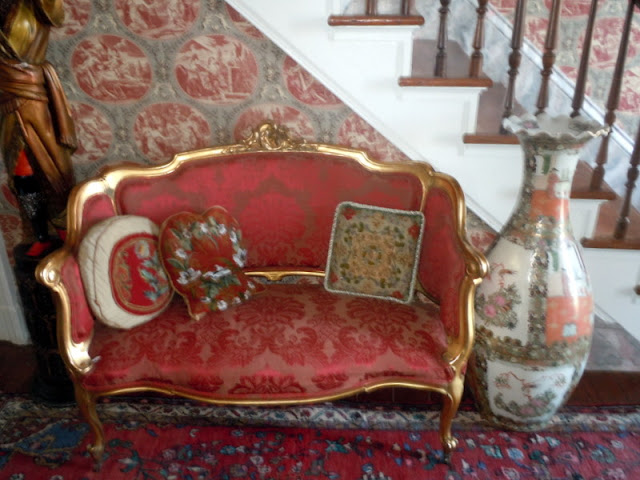 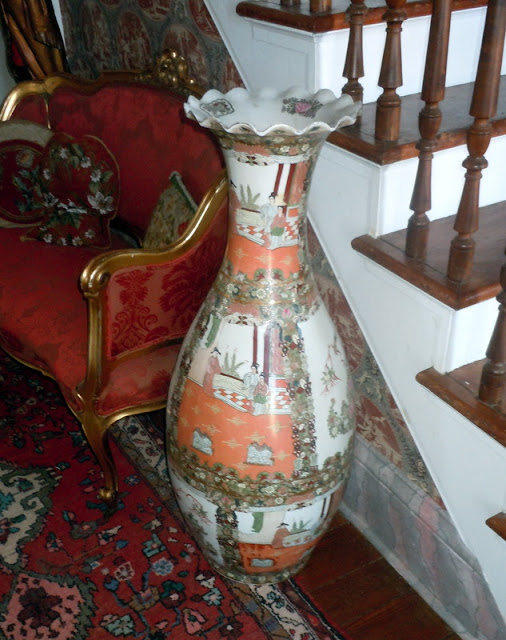 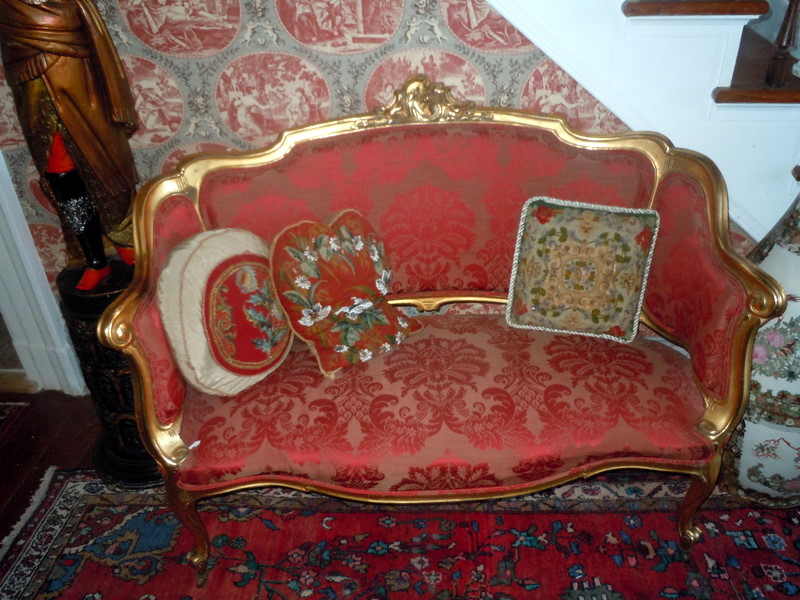