Queen of Love and Beauty- Part 2

Sunday I did a Pre -Valentines Day post about women in Mythology that represent  Love and Beauty. The first post was all about Queen Aplrodite.She has been called the Greek Goddess of Love, Beauty , Pleasure and Procreation. I have a statue of her in my entrance hall. I placed her in my entrance hall, on a pier table, that is against  a wall of Lee Jofa Toile wallpaper, that has her images printed on it. The Toile pattern is called, Allegorie A L Amour and it is in a nice red and gray color. The ceiling in the entrance hall is also painted red, making this room the perfect setting for Aplrodite and a Valentines post. 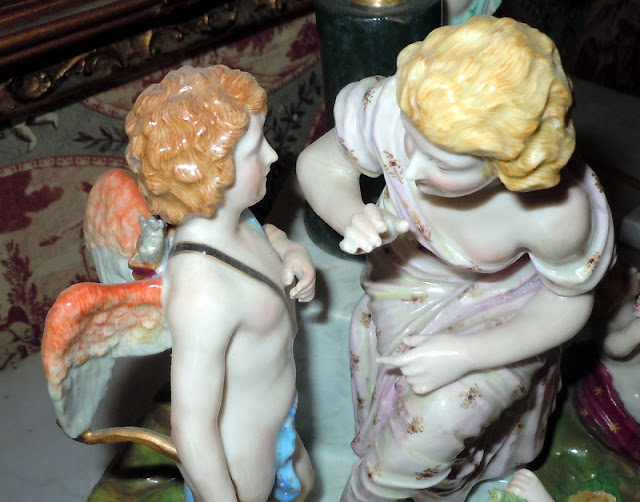 Today I am doing the second part of that blog and it is all about Hera. She was the Greek Goddess called the Queen of Heaven.She was very powerful in her own right and even more so when she married Zeus, the mighty King of the Olympian Gods. The Goddess Hera, ruled over the Heavens and Earth. She was responsable for every aspect of existence, including the seasons and the weather.
Honoring her great capacity to nurture the world, her very name, translates as the, "Great Lady." Our word galaxy comes from the Greek word, gala, meaning, "mothers milk."  The story is that the Milky Way was formed from milk of Hera's breast, and when drops fell to earth, lilies sprang up.She was also worshiped as the Roman Goddess, Juno, the month, June, was named after her. It is no wonder that June is the most favorite month for weddings.
It is because Hera's great beauty, especially her large eyes, that she is linked to sacred animals. The cow and the peacock. The cow symbolizes the Goddess Hera's watchfulness over her subjects. The peacock symbolizes her luxury, beauty and immortality.
The Goddess Hera blessed and protected a woman's marriage, bring her fertility , protecting her children and helping them find financial security. Hera was in short, a complete woman, over seeing both private and public affairs.
When Hera married Zeus , they had a honeymoon that lasted 300 years. After the honeymoon, Zeus went back to his old ways  of raping and taking any woman he desired. This caused Hera to go to Earth and wonder around among the mortals, like a lost soul.Zeus finally woed her back and a second wedding took place.
The goddess Hera represents the fullness of life and affirms that we can use our own wisdom in pursuit of any goal we choose.
Just like Queen Aplrodite, I also have a statue of Hera. She is also in my entrance hall with a back drop of the Allegoric Toile wallpaper. The paper also has images of Hera. The staue is made in Germany by the Meissen Factories. This is a very large and impressive piece. Meissen can be quite expensive. I placed it by the front door on purpose. I have told all my family, if the house is on fire, get that Meissen Statue first, Sissy Dog Next and then worry about me. I figure I could grab it on the way out. Heaven forbid we ever have to find out. This is one of a few pieces ,that  I have a special insurance policy on.The figure group  has Hera,  angels and  cherubs. There are also maidens tending her. It is very beautiful. It is an oval shape, just like the shapes in the wallpaper. On the wallpaper there is Hera, maidens, angels and cherubs. it almost looks as though the paper was designed for this statue.


I hope you can and will come by someday soon for a tour and see Aplordite and Hare in person. Of course I will leave the lights on and Sissy Dog will always meet you with a jump and a kiss. In the meantime,  if you read this and like it, please take a minute and leave a comment. I love getting them and I always give on in return. I hope you are getting ready for Valentines day. I am, I have Sissy's treats all ready. Keep on Blogging. Richard 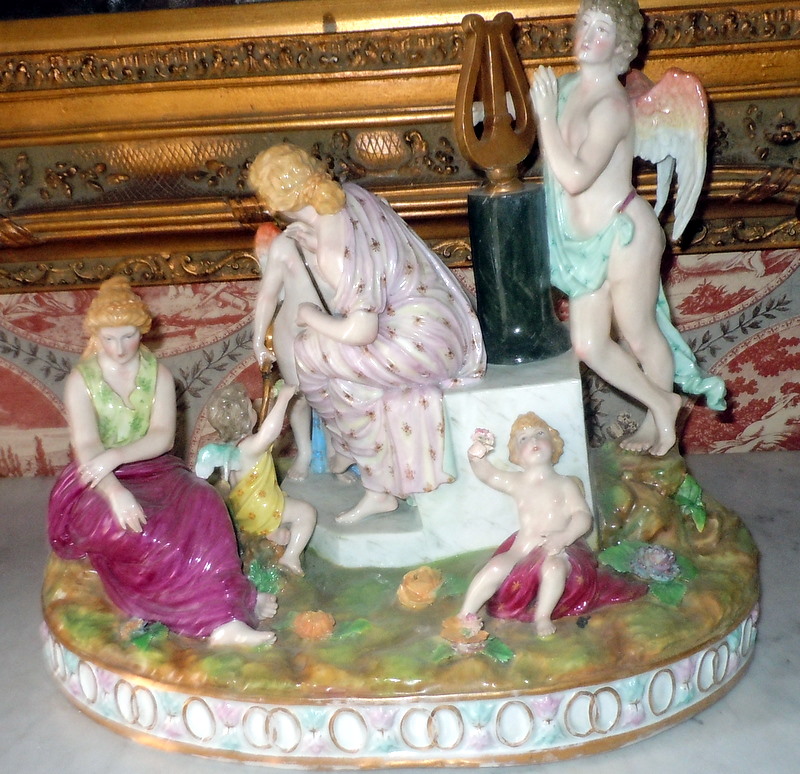