﻿
﻿﻿﻿﻿
﻿ ﻿ ﻿﻿ ﻿
Many years ago, when I was first starting out  as an antique collector, I  lived across the street from a old mansion, that was owned by the 39th Governor of Missouri, Lloyd C. Stark.After his death, there was an estate sale and I have a few treasures from that old historic house. I was just out of college and  had a brand new job, teaching art, in Louisiana, Mo.I think I was making a grand $12,000.00 a year, so you can see there was not a lot of money for antiques. I did find one thing that I have loved and held onto ever since that sale. A hand forged with cast iron pieces, kettle stand. I have seen two others since that day. I bought one of the others and resold it. The other was in a book about iron furniture.
Lloyd C Stark was born in 1886 and died in 1972. He  was elected the 39th Governor of the Great State of Missouri in 1939. Stark was part of a family ,rather prominent, in Missouri and was active with his brother,Paul,in the family owned business-Stark Brothers Nursery,in Louisiana,Mo. At one time the nursery was the oldest in America  and the largest in the world. The nursery claims to have developed the Stark Golden Delious Apple. They also made great discovers in other fruit developement. Mr. Stark lived in a grand old house that was known as Aberdean. It still stands today and is owned by a good friend of mine.


﻿﻿
﻿ ﻿
Cast Iron furniture was introduced to the American public around 1835-1850. The earlist cast iron furniture was made by foundries specializing in architectural elements  and made the furniture as a side line. Cast Iron is made by pouring molten metal into a mold, a process that makes it easier to create flued and intericate designs. Hand forged furniture was made by a Blacksmith and each piece was heated and hammered and bent into shape. Latter the two processes, hand forges and cast were married up and it made the work go faster and the Smith could do things that were not possible without the casts. My Kettle Stand is a combination of the two.
Atlanta Stove Company in Atlanta, Georgia, made lots of cast and forged iron pieces, along with there stoves. There stamp is on my Kettle Stand. Some of the most beautiful fences, furniture and fountains came from this company.


I keep the kettle Stand on the screen porch in the summer. In the winter it lives in the corner of my country kitchen. There would have been a burner under the kettle to keep the coffee, tea or water hot. The stand would be placed by the table so the hostess could reach it and serve. My stand has a wonderful copper kettle. It was on the stand when I bought it from the Stark Estate. It was so green that I had it cleaned up.The kettle is marked England. The stand was black when I got it and it stayed black for years. Last summer I painted it white for its new home ,on my screen porch, that also is home to a lot of Victorian Wicker, and that will be  another post latter this spring.
I hope you enjoy my Little Stand and it's story. Come by any time for a tour. I will leave the lights on and Sissy Dog will meet  you with a jump and a kiss. 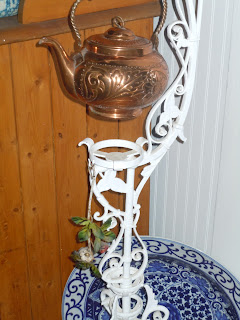 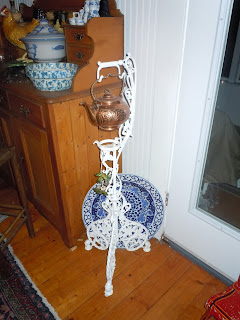 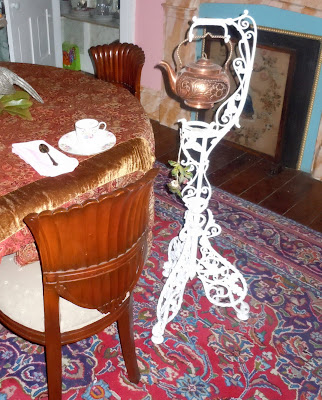 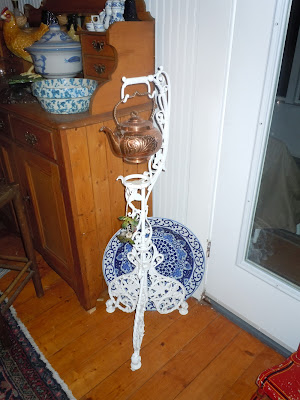 Posted by Richard Cottrell at 8:06 AM 14 comments: