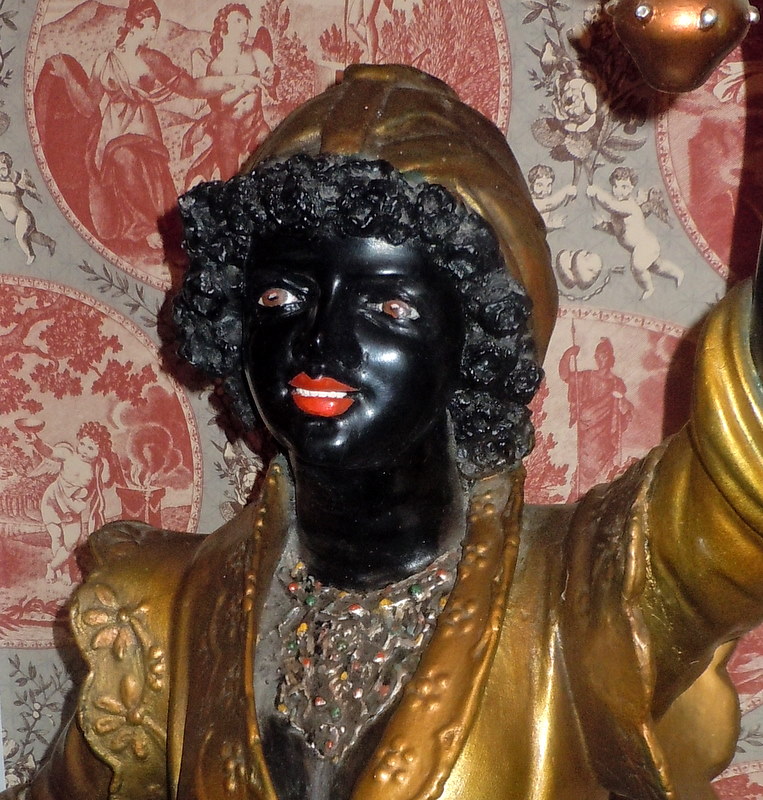 I would like to start this post , by saying , that I am not a Racist.I hope I do not offend any one. That is  not  my attention. If I do, I would like to say I am sorry, right now.I love Blackamoor sculptures for there beauty, history and decorative appeal. And after all, they are only statues, made long ago and not by my hand.
Moor's were a type of black Africans that were captured and sold into slavery. Mostly on the European market and very heavily in Italy. They were Muslims and some were even found in Spain. They were often referred to as,"Nubian Slaves."
Blackamoors have a long history in decorative art and it stretches all the way back to the 17th century. The trend seemed to have started in Italy and especially in Venice. The Moors  were sometimes used to steer the Gondola  boats and this is the earliest pictures we find of them. Statues  of Blackamoors in theses boats are very common.
I am not sure how politically correct they come off nowadays, still, in design circles their true charm and decorative statements remains alive a well for the next generation. They are considered very, "Park Avenue."(New York.) Blackamoors enjoyed a surge of  popularity during the 20th century and are somewhat popular today. One does not see them that often in the Americans, but more so in Europe. Sometimes these statues can start tongues wagging, much as  a person wearing fur does. I am not sure how they became a  popular design motif, but their history through decorative arts is well documented.
Blackamoor is a slang word that refers to dark skinned people, not so much today, but in the past.
Most older Blackamoors were carved out of wood and covered in gesso and polychrome painted Some are made of bronze and other metals, while many are made of ceramic and porcelain. They were designed to  be mostly pedestals to hold candelabra or flowers. Some were tables and wall brackets. Smaller ones were often found as table decorations. There are so many of them in Italy that most people hardly even notice them.
Blackamoors have been favorite decorative pieces for  antique collectors and interior designers for years. They were first created during the Italian Renaissance and became a favorite in the Victorian era.I have always had a thing for them. I guess the first ones I came across were in the movies. I  love to watch period movies , and to be taken back in time ,and experience the ancient world. I have seen places and things in the movies that I would never have seen other wise. I have had several Blackamoors in my days, as a collector and antique dealer. The first one I bought in an antique shop in Chicago. I paid $2,500.00 for it ,25 years ago and I had to put it in lay -a-way. I have bought and sold several since then. I am always sad when they sell and have to go hunt another right away. I guess I kinda feel, Blackamoor deprived. Sad ain't it. I have one today at, My Old Historic House. I bought her, here in rural Missouri, at an antique mall. I almost did not stop at this place, as I get tired going through all these big endless antique malls with booth after booth of junk and common stuff. I was on the road and needed a bathroom break, so I pulled off and went in. Well I almost wet my self when right inside the front door was my Blackamoor. They knew what it was and kinda what it was worth. I got it for a fair price and a lot less than the first one I  bought. I keep her in the entrance hall where I think she looks real pretty against the red and gray Toile wallpaper. She is one of the first things people see when they come for a tour. I am sure some people are shocked, but they have to realize, that she is just a sculpture.
I hope you will come by some time to see Ms. Blackamoor and take a tour. I will leave the lights on and Sissy Dog will always meet you with a jump and a kiss. 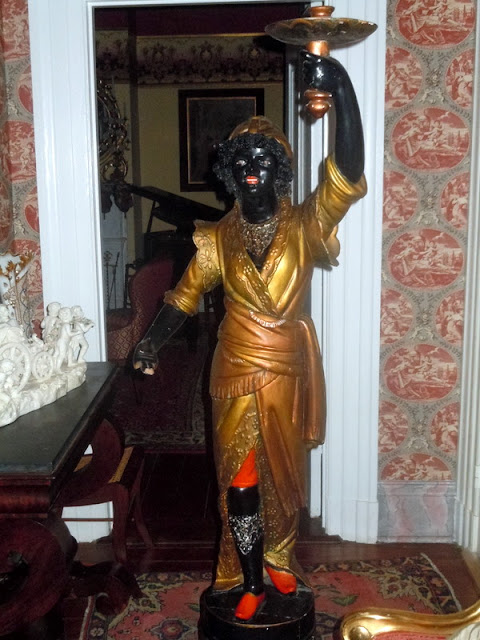 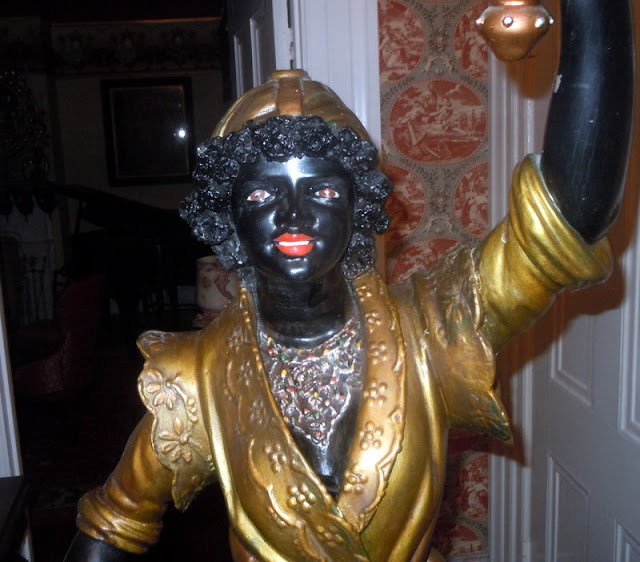 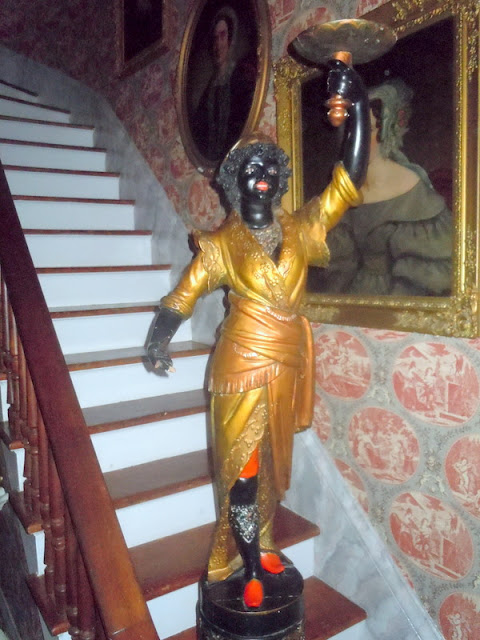 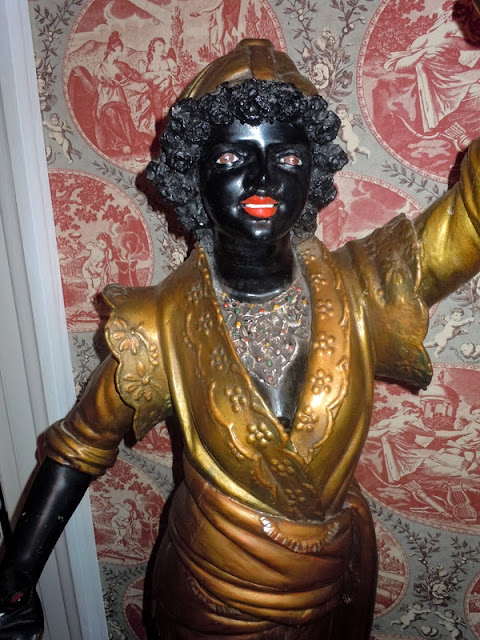 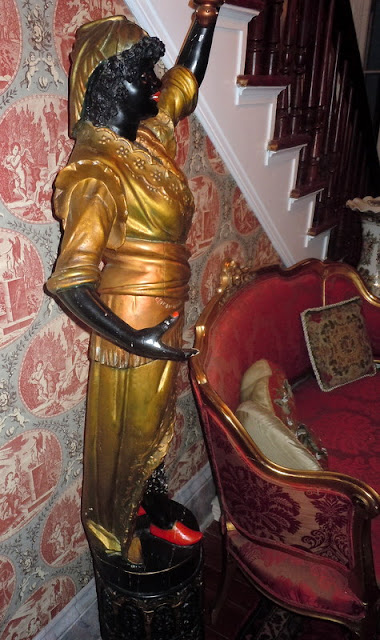 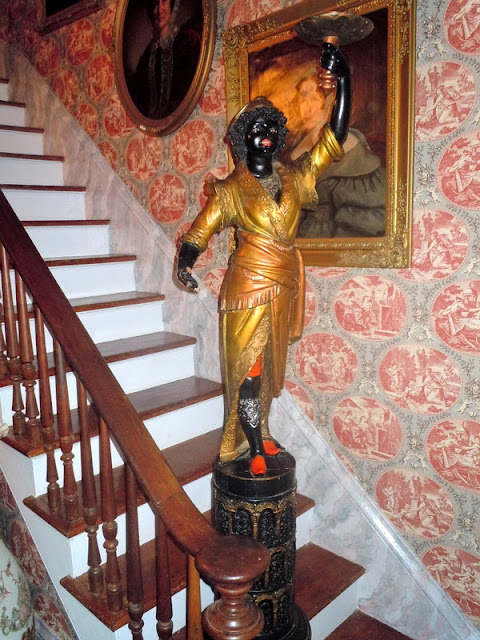 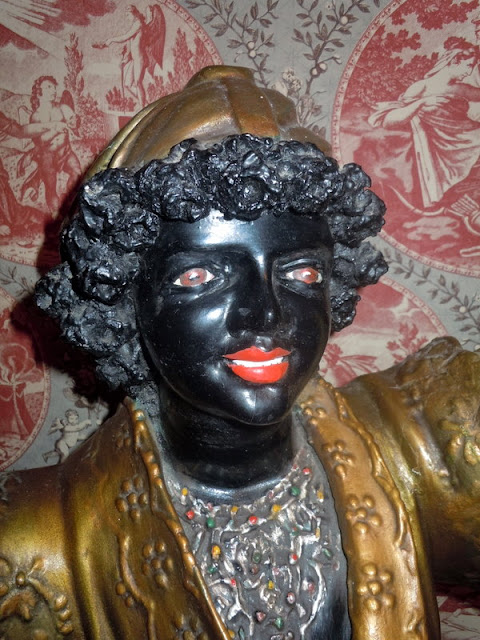