The Jewels in the Crown 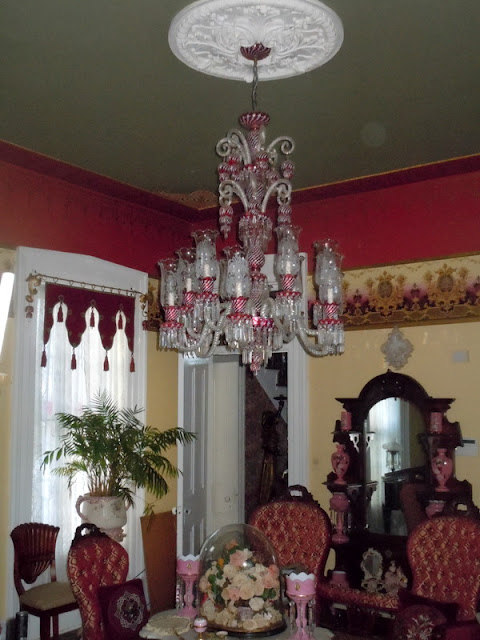 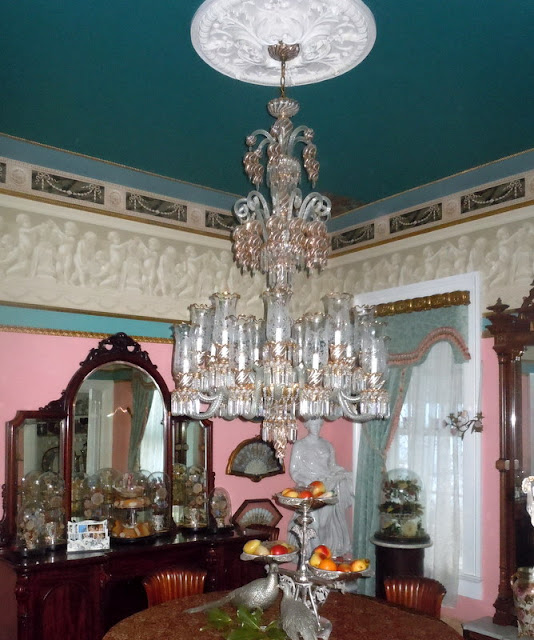 A few years back I had a very big,10,00 sq. ft., antique shop in St Louis.. It was located in an old Florist building, that was built during the Worlds Fair in St.Louis,1904. It had several floors and in the middle was a large greenhouse. It was the first free standing greenhouse west of the Mississippi and the ceilings were 40 feet tall. Years before I opened this shop, on a visit to New York, I had dinner at the Tavern On The Green in Central Park. Well sadly, it is no longer, but if you were  ever there, you would know, that there was a  large greenhouse and it was full of beautiful colored chandeliers. When I went back ,I would always make reservations for a table  under the Cranberry chandelier. The last time I was there, was Easter Brunch ,a few months before it closed and all was sold off. So to make a long story short, I wanted to fill my new shop's greenhouse with crystal chandelers. I did and I had the shop for over 6 years and in that time, I sold many, many chandeliers. I had about 300 at all times. I was always on the look out for them and everywhere I went I asked if they had any chandeliers.I bought them and shipped them for everywhere.
I have a friend ,CEO, in  the fabric business and she has a office in the Design Building in New York. She had a friend that was a buyer for the Hemsley Hotels. Hemsley and his wife, Leona,the Queen of Mean, bought a old Mansion  in New York and built a 55 story hotel around and on top of it. It was called the Hemsley Palace Hotel.Susan and I stayed there a couple of times, free, because of her friend. When
Mr.. Hemsley died and poor Leona had to go to prison, she sold off her hotels.The New owner renamed it the New York Palace.  Most of the hotels  were bought by The Sultan of Brunei, once the richest man in the world. Well Susan's friend stayed on with the new owner as a buyer. The Sultan liked a chandelier that he saw in the Dolmabahee Palace in Istanbul Turkey. It was one of the largest chandliers known in the world and it was made of French Baccarat Crystal. The Sultan,  with his influence, had this chandelier copied in various sizes and had them made in Istanbul for his hotels. When I told Susan I was looking for just the right chandliers for my new,old,house, she told her fiend ,the hotel buyer, who called me and told me to take a look at these Turkish chandeliers. I did and I was sold at first glance. I ordered them and months and months went by before I ever heard a world. I was begining to thank, I had been taken by the Sultan. But one day, out of the clear, a big truck pulled up and put three huge wooden  crates on my side walk and pulled off. They were to big to bring inside so I had to take them apart and carry Millions  of pieces inside. There was no directions, just that picture that I had first seen. They were in storage for a long time before I got the house and was ready to hang them. I was afraid they were broken or half missing. I had a man in St.Louis that repaired my chandeliers, re- wired them and hung them for people ,after I sold them. Donnie came to Clarksville with his big truck and all the millions of pieces and together we put those three chandeliers together. Took 2 days of long hours and many  bad words. 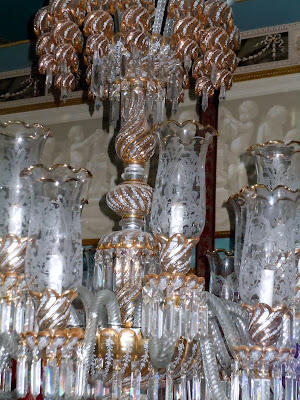 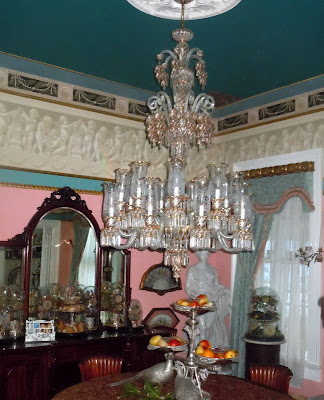 They have been hanging there every since. I take great pride in them and feel they are the Jewels in the Crown of My Old Historic House.I know they are the most beautiful in Pike County and maybe in Missouri. When I give tours they are what people comment on the most.  The dining room one is clear glass with heavy gold trim and tiny white flowers. It has 25 lights and 5 foot tall.. The two parlor ones are almost 4 feet  tall and are cranberry with gold trim and white flowers. They each have 18 lights. They have been there about 4 years now. Last fall when the people from Victorian Homes magazine came to take pictures my sister,niece and sister in law and I ,cleaned them for the first time and probably the last. 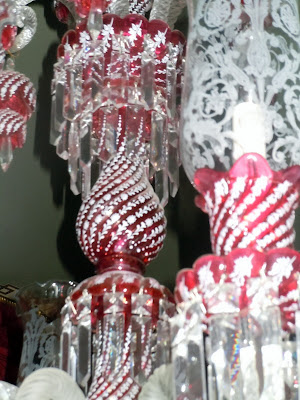 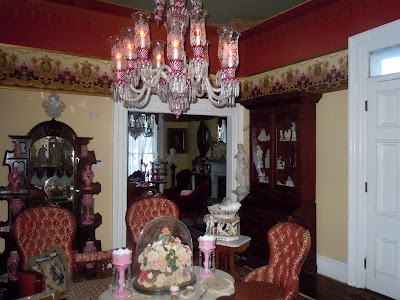 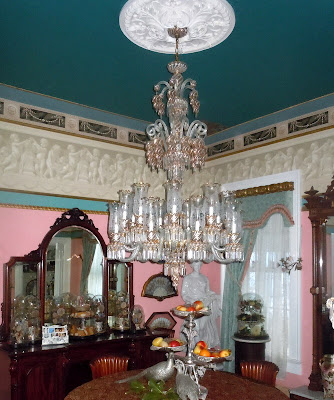 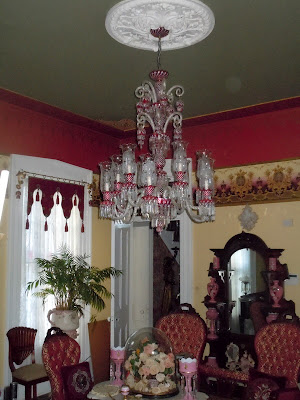 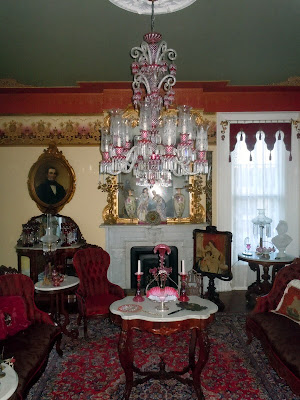 And speaking of Victorian Home Magazine, I got a call from the editor about something and she said it would be soon. When I get the exact date, I will pass it on.
Come by any time for a visit and see the chandeliers. I will leave them on and Sissy Dog will meet you with a jump and a kiss.