Dogs have been featured in works of art of various forms,such as paintings,sculpture,porcelain,drawings and photos,either as  a primary subject or a supporting character, like a prop, for several centuries.Dogs have been used in art form since the Greek and Roman times. Especially popular in the 18th and 19th century in Europe. By studying the portraits of pampered pets and sporting dogs, one can trace the evolution of different breeds and types of dogs through the centuries.Dogs are a common visual motif in Western art and have been called."Artist Best Friend."Although dog portraiture did not become a wide spread practice until the early 18th century.Some dogs that we see in former art are no l/onger around, the breed has died off.
Dogs, even today, are natural adjuncts of portraits, appearing in fashion and interior design.Italian painters of the 16th century produced a succession of memorable cannies that suggested how familiar and admired dogs had become. The loyal dog has appeared in paintings as far back as 4500 BC, when they were painted on cave walls and carved into bone pieces.
You can visit most any art museum and find works of art that feature dogs. One in particular is in St.Louis,Missouri, about 70 miles from me. The Museum of the Dog. 1721 S. Mason Rd. Paintings, sculptures,drawings, trophy's and so on and so on. It is well worth the trip and they have an amazing gift shop with fun things for sale. Another museum is the well know, William Second Gallery, at 52 East 76th Street in New York, City. This gallery features some wonderful works of art about beloved dogs. And there is always some for sale. 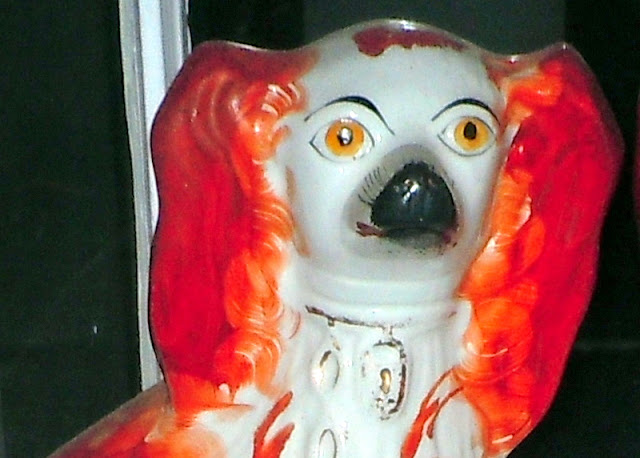 The ancient, Native Americans, were lovers of dogs and often depicted them in the art. Weaving, bead work,paintings and sculpture, all have survived for today's viewing.Dog art, has also been discovered in the Tombs of the Egyptian Kings.
A good book is, Dog Paintings, a history of dogs in art. It is English and written by William Second and was published in 1992. It high lights various art forms from 1840-1940 and is a social history of the Dog in art. Beautiful photos on every page. Great coffee table book.
There is a Dog Art auction, each year,  along with, the Westminster Kennel Club Dog Show. The popular sale show cases two centuries of dog paintings and sculpture, by important artist. Feb. 12th at 10:00 am till noon.Doyle New York  Auction House.
Dogs  have been found in folk art for many years and are a very favorite subject. Hooked rugs, carved wood, metal,weather vanes, paintings, from 1750 to 1800's. and sculpture
Dogs in porcelain reached it's height in 19th century England. Makers like: Royal Worchester, Rockingham, Mintion,Copeland, Davenport and Staffordshire, all worked in Staffordshire England and all produced dog items. Staffordshire dogs started in early 19th century. The first pair was made and given to Queen Victoria as a wedding gift. Victoria was a dog lover and it has been reported that she had as many as 12 at one time. During the wedding the dog statues were on display with the other wedding gifts. soon every body wanted a pair as the Queen had a pair. Soon they were being mass produced and were found on every mantle, from a modest cottage to the grandest of homes. They have been loved every since, by the Americans as well as the English. Very popular in the interior design world. many reproductions have been made since then. Staffordshire dogs are what we think of most often, when we think of dogs on art.

I'd like to share with you today, my dogs, that I have in art. I have collected them over the years -not so much for the dog-but mostly, for the entire piece. I hope you enjoy  our little lesson today about dogs in art and also enjoy my little collection. Please come by any time for a real tour. You are always welcome, I will leave the lights on, and Sissy dog will always meet you with a jump and a Kiss. Of course, Sissy Dog ,is as always my favorite. I have included a few pictures of her, her art and her  being Sissy. 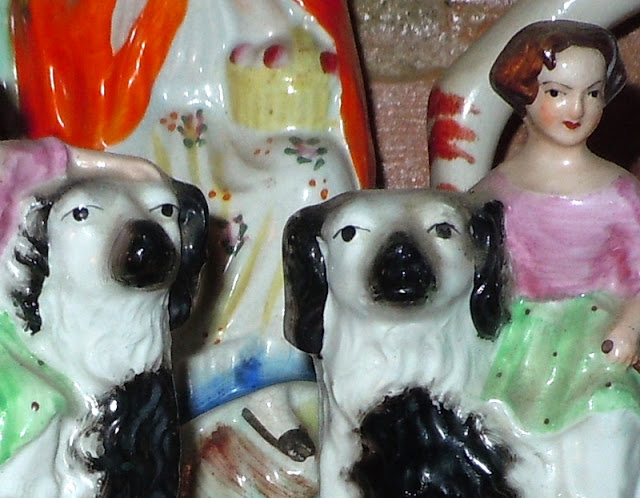 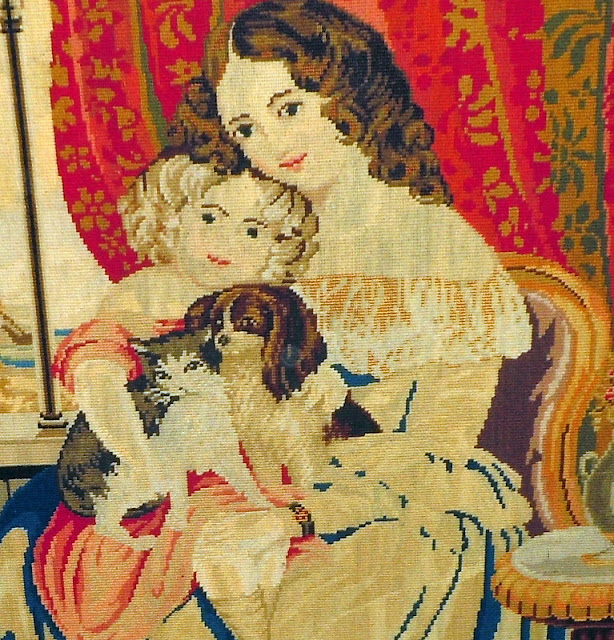 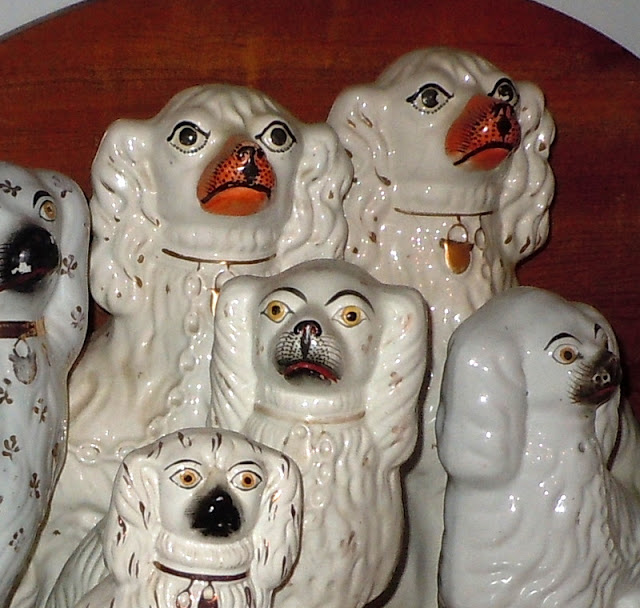 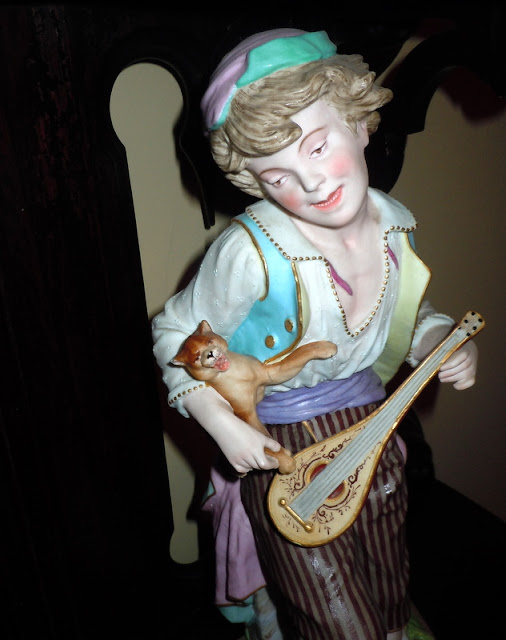 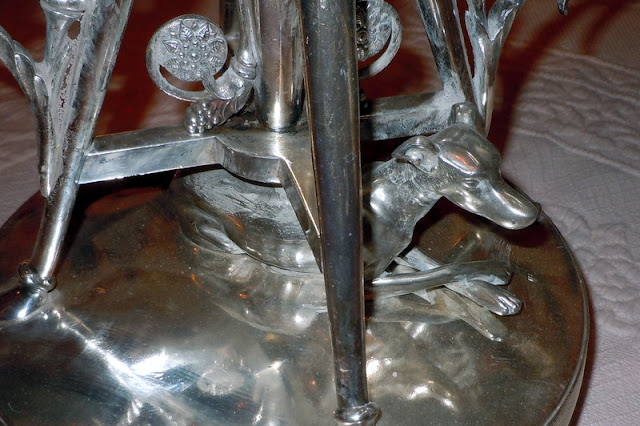 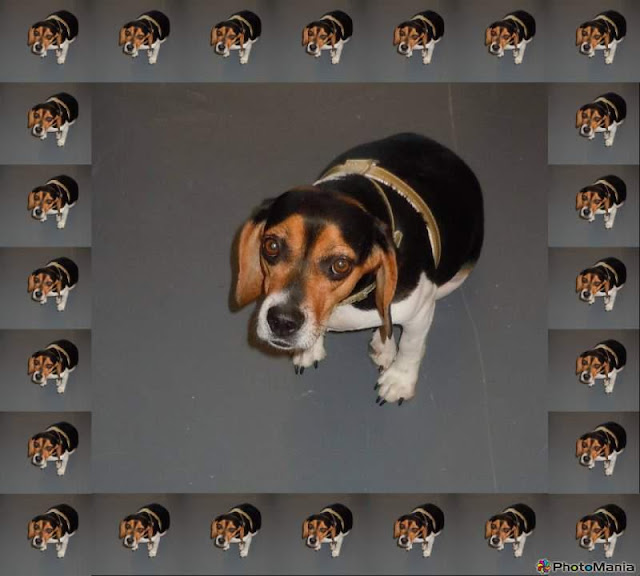 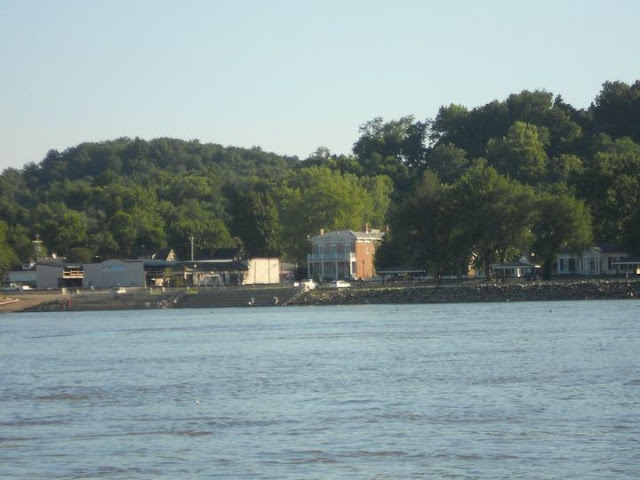 Posted by Richard Cottrell at 8:37 AM 31 comments: