Well another year has pasted and here we are ready to celebrate another Christmas. It is hard for me, an Old Timer, who is set in his ways and wants to remember the way Christmas was when I was a youngster.Things have changed so much and I am not sure they are for the good. The commercialization of Christmas is big business, but very sad to me. When I grew up there was no Black Friday. I hate the term and every thing it stands for. Gift giving has gotten out of control No longer does it have the meaning it once had, where bright eyed children got a sack of candy, an orange, a few coins and maybe a couple of toys. They knew it was a special time when every one was cheerful, spreading joy and love. The house was  simply decorated with  fresh cut greens, a tree and some bright ribbons. Sweets were abundant for the children and made many a smiley faces. The big meaning was Christ our Lord and Savory. Church programs, Carols and Nativity Sets were the center of  attention. I would be willing to bet that most kids growing up today have no ideal what Christmas really is all about. Don't get me wrong, there are still families that go to church, mid nigh mass and still teach there kids about the real meaning of Christmas. Today the decorations are over the top, almost extreme. I think most people don't even see them. I look at them as Christmas decoration factories that exploded. If one set of lights is good, one million is better. There was a program on the other night called extreme Christmas. Neighbors out doing neighbors, where did we go wrong???
As a child growing up in the country I only got to go to town once in awhile. It was real treat to go at Christmas time. Bright lights, trees in all the shops and Christmas music on loud  speakers. I remember decorating the big tree at church and school and thinking it was the most wonderful time and so exciting.We went out in the fields and cut cedars, they were kinda brown and very sticky, but that's all we knew. I remember when I was 12 I asked for a store bought Christmas Tree. My mother, didn't tell my father, but on a trip to Louisiana we got one at the grocery store. I don't think a million dollars would have made me any happier.

The first Christmas tree in the White House was when Benjamin Harrison was president. in 1889. It was placed in the oval room, known today as the Blue Room and decorated by Caroline Harrison, the First Lady, who was an artist. She set the stage for what would become a much beloved Holiday tradition. The present day White House tree is also placed in the Blue Room.
The marriage of Queen Victoria of England to Prince Albert of Germany in 1840 was a very important  event in the history of the Christmas Tree. Victoria was not born to be Queen. Her uncle the king, had now children, making her next in line to the throne.  In Germany they have had Christmas tree since the 16th century. Prince Albert brought this tradition with him when married Queen Victoria. The Germany's had for many years brought ever green trees into there homes in the dark, long cold winters for decorations., They were small  cut fresh trees and were placed on table tops. News of the Queen having Christmas trees in the palace soon spread and they    then became fashionable around the world. Some Germans arriving by way of Ellis Island also brought this tradition to American with them.
Christmas became an state holiday in 1870 when President Grant signed it into law after it had passed in both houses of congress. It was signed in June of that year and December 25th was to be the day from then on.
Most children, except city children, at that time of history were home schooled. As part of the school activities they did art projects. Hand cut snow flakes, paper chains and popcorn  strings were the favorite Christmas tree decorations at that time. Very few people had store bought decorations available. Tinsel ,as we know it, was invented in Germany in 1810. Germany, which makes sense as they have had the Christmas tree tradition the longest, also starting making fancy glass beads and figures to decorate trees. Poland soon started as well. These were made in a room at peoples house and  was known as,"Cottage Industry." They were delicate and expensive to ship. Soon the postal system developed better means of shipping and they were more readily available around the world by 1880.

In Germany the real fir trees were beginning to suffer from mass cuttings for Christmas trees. The Black Forest was also makers of fine furniture and clocks.So the solution was the invention of the first fake tree. Known today as German Feather Trees, these trees were also hand made in Cottage Industries. Goose feathers were cut down the center, the quill removed, died green and tightly wrapped around a heavy wire. Various lengths of wire were attached to a base to resemble a tree, Many of these trees have made it to modern day times. They are prized by there owners. Lovers of old fashioned things have made them popular once again and many companies are now mass producing them.  Since that time the fake tree has become almost the norm. Some children have never seen or experienced a real live tree. Today they are made in all colors and sizes and even come with the lights already attached.
The poem, Twas the Night before Christmas by Clement Clarke Moore was first published in New York newspaper in 1822. Moore was a Bishop and he officated in the inauguration of George Washington.  In the original poem, Santa was referred to as St. Nicholas.Before this poem was published there was no image of Christmas or Santa as we know them today. St. Nicholas was the Saint of Children. When he went into the priest hood he vowed to give up his worldly goods. So he often made a habit of dropping gold coins down the chimneys of the poor. Sometimes the coins would land in the stockings that were hung on the chimney to dry  and this is where the tradition of  hanging stockings came from. Most people relate the art of Christmas gift giving to the three Kings who came to find the Christ Child bearing gifts.Americans are responsible for the way Santa looks today. In many Europe Countries he appears as the old version of St. Nichols.
Deck the Halls with Boughs of Holly is a very old song. The melody is Welsh and dated back to the 16th century It become most popular in 1870 with the addition of the words we know today. This is the reason we decorate with holly and greenery today.
Before 1890 Christmas trees were lite candles. A bucket of water was always present in case of a fire. In 1890 Edward Johnson hand wired 80 light bulbs of red and blue and wrapped them around a Christmas tree. Electric Christmas tree lights did not catch on fast. It was a decade before they did so. In 1899 President Cleveland commissioned the first electric lighted Christmas tree for the White House. At a cost of $200, about $3000 in today's money. General Electric made the first   electric light sets in 1903.  The middle of the 1900's brought the mini lights sets, called twinkle, and Christmas trees have never been the same since.


Commercialization of Christmas as we know it today has become a religion all of it's own. Shopping substitutes as the primary source of Spiritual Meaning. The religion deity is Santa Claus, it's house of worship is the shopping mall. and it's Heaven is the thriving  economy. Santa is the Savior, not Jesus, because he is now the symbol, that most people know.
I have tried at the 1845 Historic Elgin/Cottrell House Museum in Clarksville,Mo. to take my visitors back in time. No electric flashing lights, no trees hung upside down and only the simple things that meant Christmas so many years ago. Please consider taking a  tour. Just call anytime for a reservation.573 242 9688. Tours given anytime with a least 2 people. Thanks and have a wonder full Merry Christmas and the happiest of New Years Ever. Richard 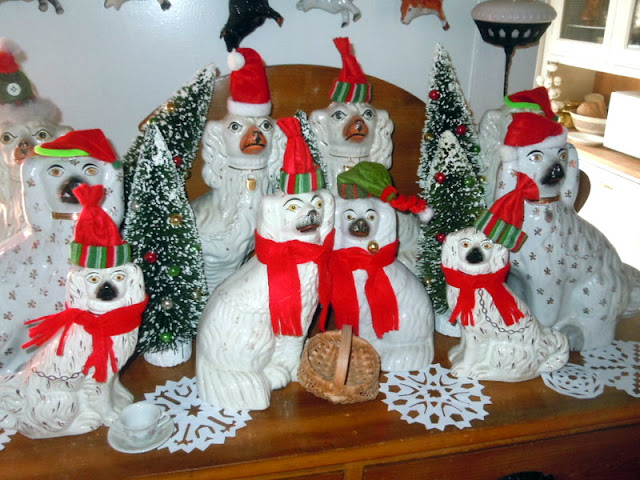 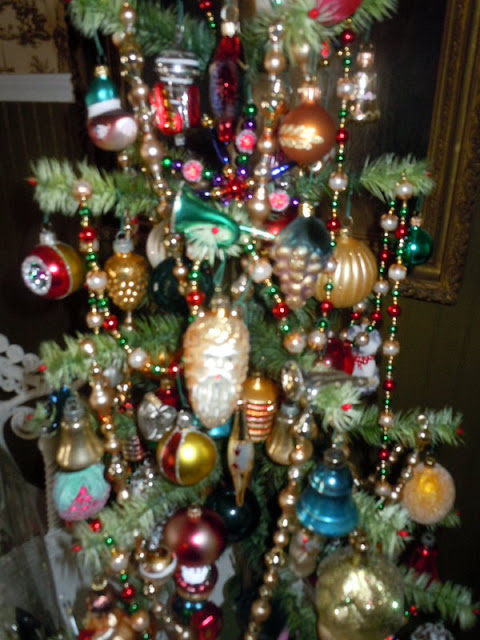