Usually when I am looking for something to add to one of my antiques collections,I think, bigger and better. That does not always apply. Sometime the best things came in small packages. My post today is about  some items  that are, "Little but Mighty".So many people come into the shop today and say."I don't have any room for new things", I want to say,"why are you here then"? But under my breath I am thinking, "there is always room for more"! And to me that is the dumbest statement. It is like going to a  grocery store and saying, I don't need food as I already  have some at home. DAH!!!!  If I had an  endless money source, I would be out looking for the most expensive, little, worthless things in the world.  As really,  all they are good for in todays world, is just to look at. Sounds good to me! These little gems always bring a smile. They are little jewelery  for the table. Sparkle-Sparkle! I love to say."It's mine, I found it, you can't have it"! 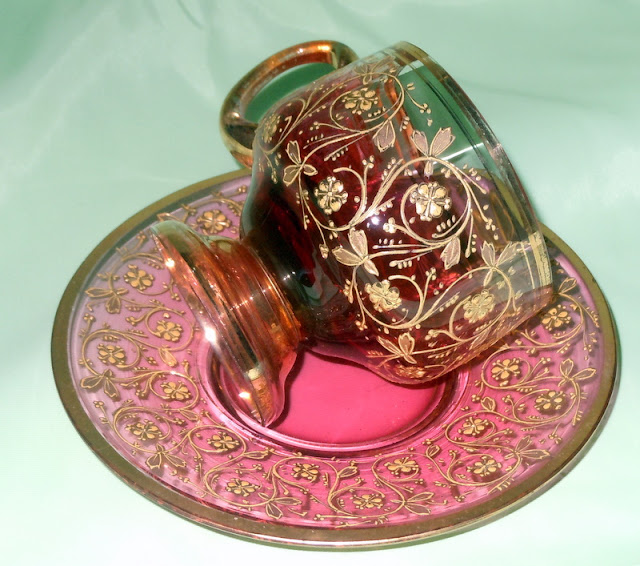 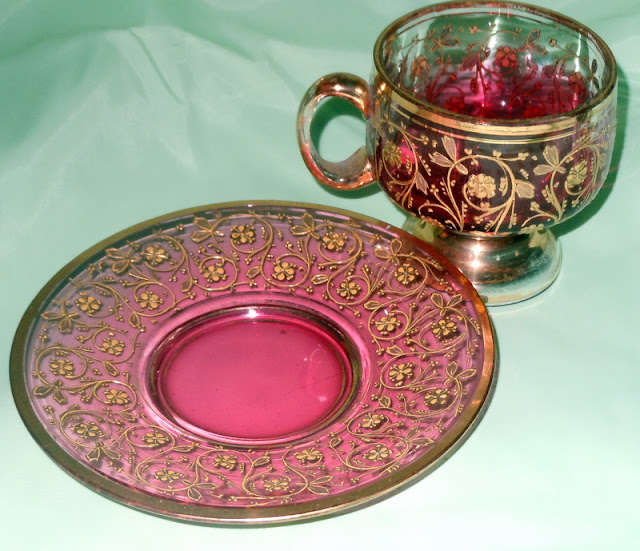 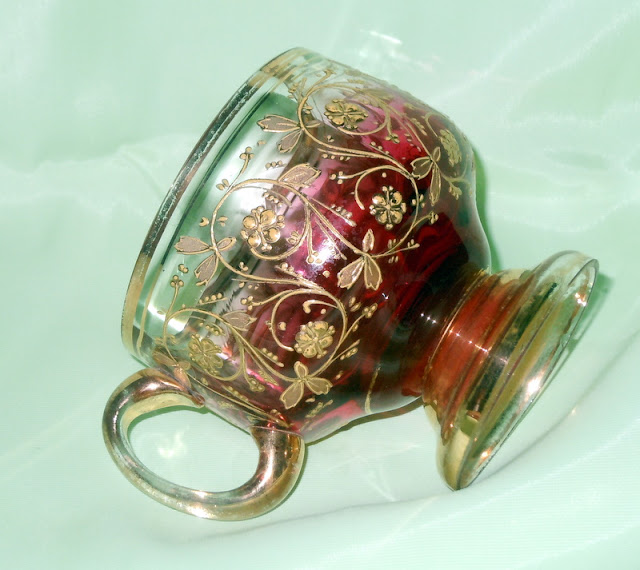 This  little stash of goodies that I am preaching about today is a table full of Cranberry- Moser Glass. Cranberry glass as it  is known in Europe and America is a red glass made by adding gold - chloride to molten glass. Tin in the form of stannous- chloride, is sometimes added in tiny amounts as a reducing  factor of gold, because of the price of gold. This glass is used primarily in expensive decorations. Cranberry glass is usually made in smaller items rather than large ones due to the high cost of the gold and the delicate mixing process required. If too much gold is used, the glass becomes a dark color more known as ruby glass. So the combination of gold and molten glass has to be just right. The gold chloride is made by dissolving gold in a solution of nitric acid and hydrochloric acid. The glass is always hand blown or hand blown into a two part mold. The finished, hand blown glass is a type of colloid,a solid phrase(gold) disposed inside another solid phase(glass). If you look from the edge it appears to be in two layers.The very top edge often is clear.  Cranberry glass was believed to have been discovered during the Roman Empire. The most famous period of Cranberry Glass production was in 19th century Britain,during the Victorian era. That would be the years that Queen Victoria was on the throne of England. 1839-1903. Cranberry glass creations were mostly popular as table displays to hold flowers or wine glasses,decanters and finger bowls. Larger pieces were usually made up of several smaller pieces, like an epergne or table lamp.Metal parts were used to connect the smaller sections. 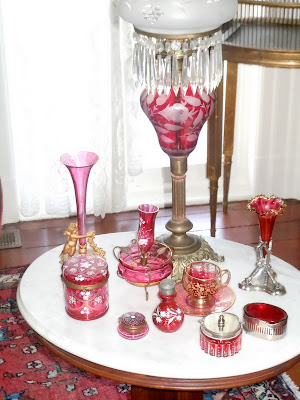 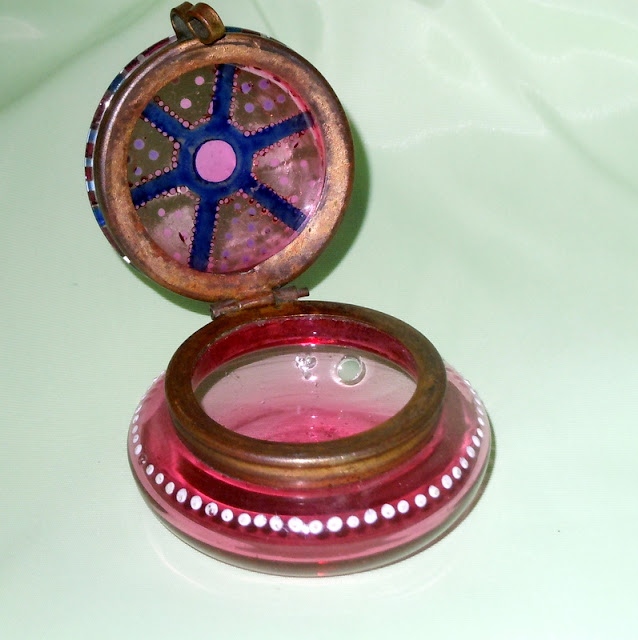 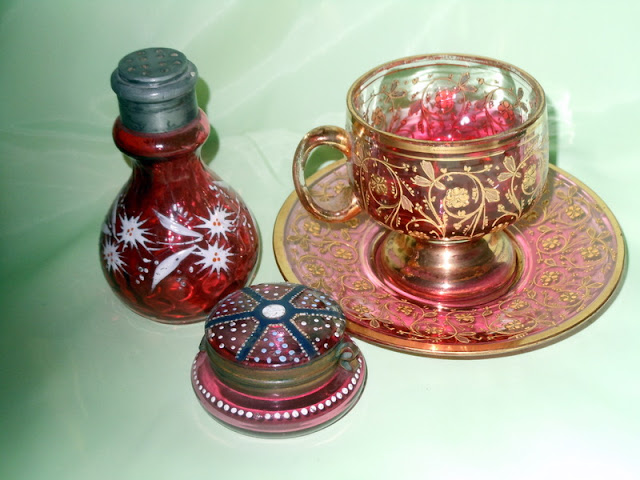 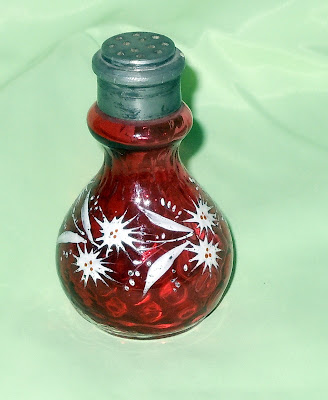 Moser was a company that made cranberry glass.It is a luxury,high-quality glass manufactured in the Czech Republic,Bohemia and Hungary.The company is known for fine stem ware,decorative glass ware,such as small vases, candlesticks, boxes and other gift items. Due to the quality Moser is one of the most collected 20th century decorative glass. Began in 1857-as a polishing and engraving workshop and developed into a glass manufacturing giant. The original company of Ludwig Moser founded in 1857 was known for the finest quality of glass. In 1904 -Moser received  a warrant to supply the Imperial Court of the Emperor of Austria and 4 years later became the supplier to Edward 6th of England. In 1915 won an award because of the outstanding quality of the hot glass applied decorations on colored Bohemian  glass.  Surface decorations with natural themes and heavy gold trim became the norm. The Moser company closed after the great depression in the 1930's. Moser was one of the few Czechoslovahian  glass makers to sign their pieces. A signed piece is very desirable and commands a much higher price in todays market. The signature is very hard to find and was usually acid cut. Sometimes on the bottom but often worked into the design. 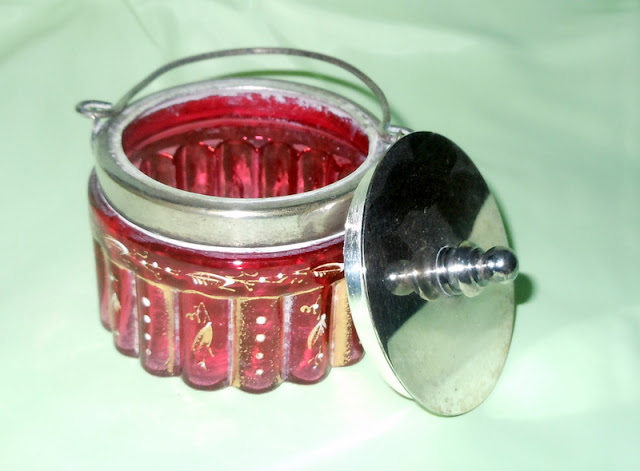 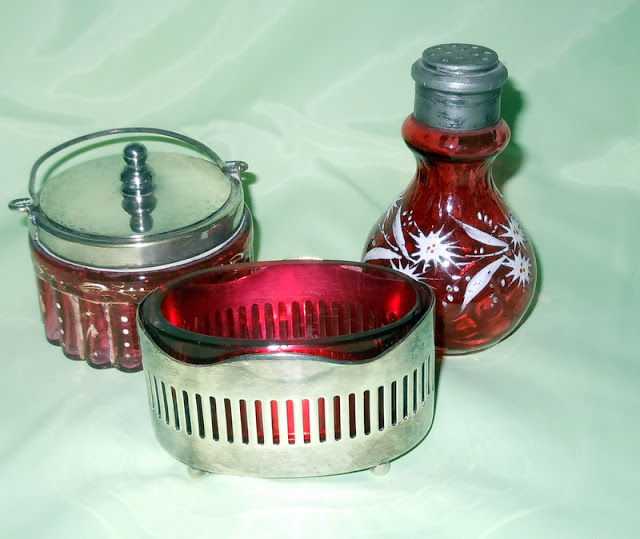 I hope you enjoy my little stash. Come by any time for a tour of My Old Historic House. I will leave the lights on and Sissy Dog will meet you at the door with a jump and a kiss. SPARKLE_SPARKLE!!!!!!!! 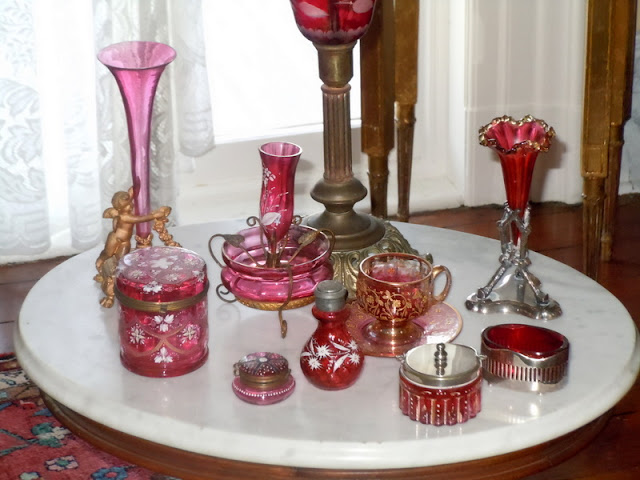 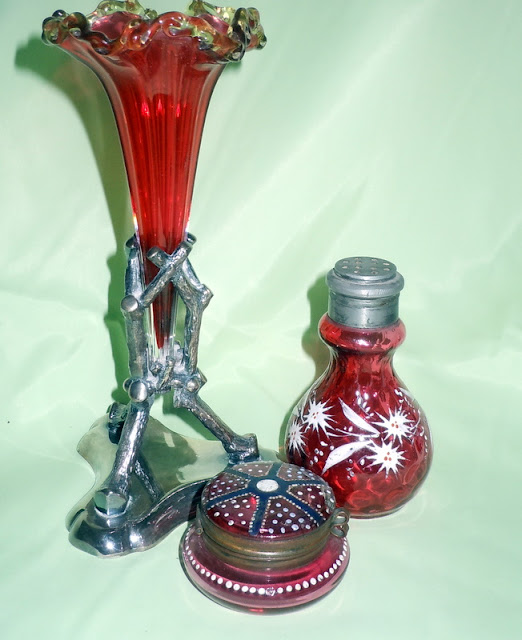 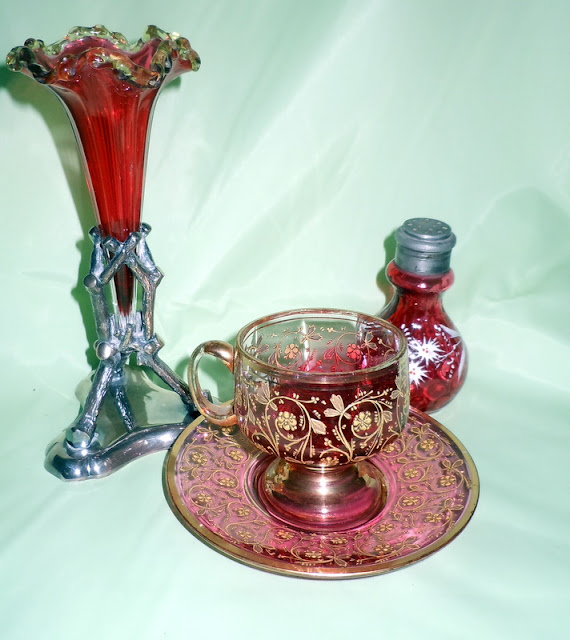 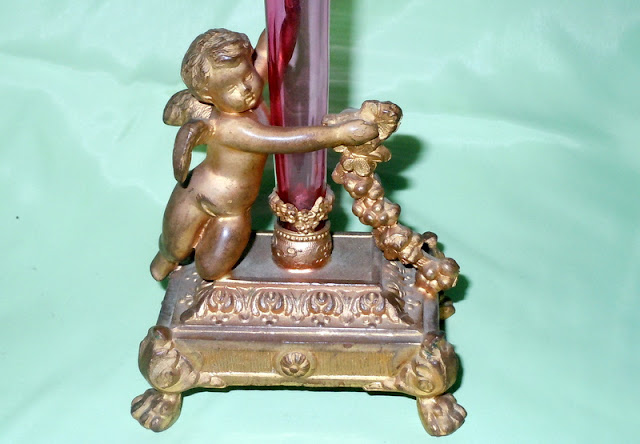 Posted by Richard Cottrell at 9:04 AM 16 comments: