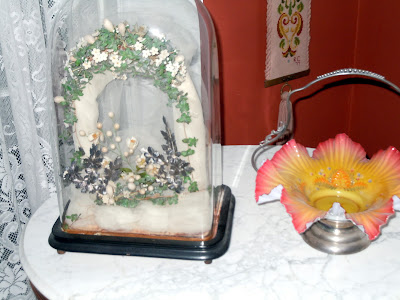 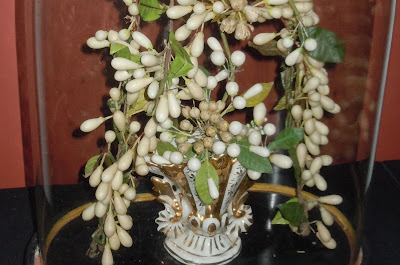 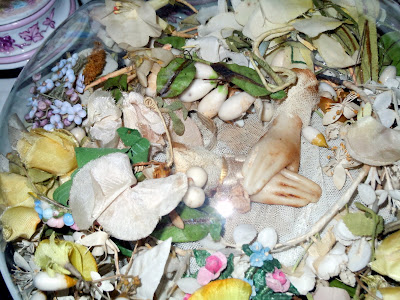 The French have a very special way about most evrything, always colorful and romantic. The Globes De Mariee ( wedding domes) they made in the Victorian years are of no exception. To all of you in Blogland that do not know what a wedding dome is, it is basically a large glass dome that is filled with pieces of things that represent different aspects of marriage. Each little item had a different meaning. I will not go into that now, as they are long and drawn out. Often after the wedding the French bride would place her wedding veil or head dress in her Globe De Mariee as a final touch.These precious old domes have somehow made it through the ages and are now showing up for sale on the open markets. And I love them , because I have a passion for anything under a dome.
The French were not the only ones who made wedding domes. Here in American they were also very popular during those wonderful Victorian years. The ones that I have found from Ameican are not quite as elaborate as the French. They are ususally just a large glass dome with the brides head dress and veil inside. A few have  a little extra and  they added things, like wax hands, doves, vases or sometimes even a photo. I for one have always asked, how can the family sell these things??? I just could not, if I knew it was my Mothers or Grandmothers. But the new generations of Americans are usually not interested in much but cell phones, blackberrys,tex,wi and lord knows what else. I am sorry if I have gotten some of these things wrong, but you see, I have never even owned a cell phone. Then again, I have to say, I am glad they wanted to sell them off or I could not find them for sale.

Antique hunting is a sport. Just like deer hunting,duck hunting or big game. There is the thrill of the hunt and the kill is getting to say," I will take it"! We use money instead of bullets. I grew up in a large family of 5 brothers and a father who were big hunters. I could never kill an animal so I took on antique hunting instead. I never held it against them and I was always in line for the supper table to eat  what they had killed. I guess it was a little double standard. I also love all the stuffed creaters my father had on display  as a trophey from his hunts. I wish I had some of them today. I could put them under a glass dome.
I have found that the best way to take photos of these domes is in a total dark room using a flash. That is the way I took all these and they seem to do better. If you try in day light they seem to catch shadows and without the flash they are too dark and with it they are too light.
Posted by Richard Cottrell at 7:58 AM 15 comments: