I'll Leave The Lamps On.

My Old Historic House was started in 1845,  in Federal Style. In 1860, a front  addition was added, along with 5 porches and ornate cornices,that turned the style of the home into Italianate.The Italianate style was the most popular style of architecture , in American, during the latter part of the 1800's.
In the process of restoring the house and making it into a Historic House Museum, a lot of decisions had to be made. The most important decision was what period to retore the house to. I chose the 1860 Italianate period, as that was when Mr. Elgin, the original owner and builder, had lived there with his family and was the most prosperious.
As for the interior decorations, most of the wallpaper,curtain styles, and paint colors are of the 1860 appearance. But, I felt it ok, to include other periods of lighting and furniture pieces. After all Mr. Elgin had lived in the house since 1845 when he first started building it. I am sure he would have had things in 1845 that he continued to use in 1860. Mr. Elgin had a paddle wheel river boat, which he was the captian,  thus he would have had access to ports,like St.Louis and New Orleans, and he could have aquired fine things.
I have a  collection of lamps ranging in age from the early 1800's to early 1900's. The first lamps ,from 1845, were known as Argand lamps. The Argand lamp was invented in 1780 by Aime' Argand. This invention greatly improved on home lighting of that day, producing a light equal to 6 to 10 candles. These lamps burned vegetable oil as there fuel and they were gravity feed. It was the lamp of choice until 1850 when kerosene was invented. kerosene was much cheaper, making lamps more affordable to the masses.
With the invention of Kerosene came the Kerosene or oil lamp. In England these lamps were called pariffin lamps. It was a wick lamp, invented  in the United States, by Robert Daisey in 1853. Wick lamps ,work in a simular way to a candle, as the lamp  oil burns down so does the wick.The Abraham Gesner Kerosene Gaslight Company was the first to produce these lamps in 1850, which soon replaced the Argand lamps in most homes.
In the last part of the 1800's gas lighting was starting to take place. Gas Lighting is a production of artifical light from combustionable gas fuel. Before electricity became suffecently wide spread and economical to allow general public use, gas was the most popular  means of lighting. These gas lights had to be lit by hand and made a nasty smoke and smell about your home, not to mention they were very dangerous. Table gas lamps were rarely found or used ,as there had to be a pipe, to bring the gas to the lamp from the source. A fexable tube was invented around 1890 and then the table lamps were more widely used. Lincoln had one in his office at the White House.
Electric soon came along in the latter part of the 1800's and early 1900's.It was not always available in rural areas at first, untill a generator was invented to produce electricity. If you had the money to buy one, you could have electric much faster than others. The electric lamps are not really right for my restoration. But, I have two examples, I could not resist using in My Old Historic House. I think you will understand why,when you see them. I like to tell people, when I give tours that they might have been added by Mr. Elgin's son,Plato, when he owned the home. The French figural lamp is from the early 1900's and the Peacock lamp is from 1920's. Of course none of these lamps belonged to any of the Elgin family. They were selected for the right age and style for the restoration, by none other than me, the present owner. 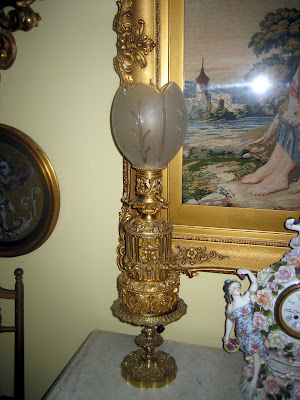 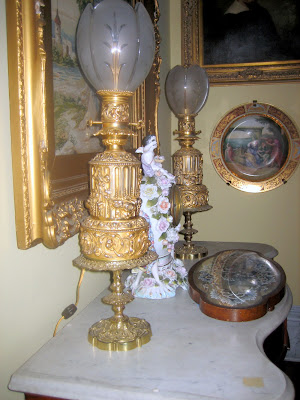 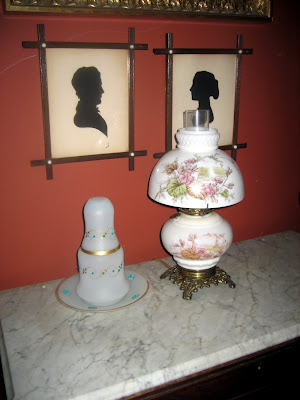 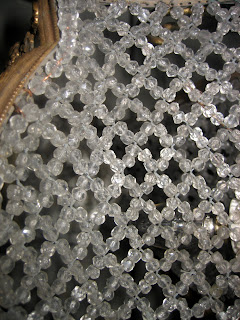 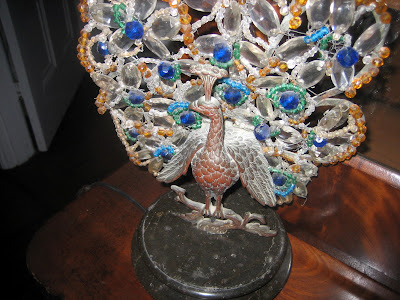 Please come by any time for a tour. I will leave THESE lamps on, and Sissy Dog ,will meet you at the door with a jump and a kiss.
Posted by Richard Cottrell at 7:44 AM 12 comments: