When  I was young, I always dreamed of having my home in a magazine. I would turn through the pages of various magazines and think,someday I will have my house in one of these magazines. Well,it looks like I am going to finally   get it done. Last October, the people from Victorian Homes Magazine ,came and spent several days and nights taking pictures. When they called to make the appointment, after I fell out of my chair, they asked if we had a Hotel. well, we don't. So I offered them a room at my house. they took me up on it, and I went into a tale spin. I called every body I knew who could sweep, dust and mop, to come help. I had only 2 weeks to prepare. I did yard work in the day light and hit the inside at night. Then I had to get 2 beds ready and the bath rooms. The last day I was stealing flowers all over town, not a lot to pick from in middle  of October. I rather have garden flowers than flower shop flowers. I made a pie ,home made bread and cooked a turkey. You think I over re-acted. Well we had fun, was a lot of work. Long days, but early nights, as they liked to use natural light. So in the evening ,we would set on my screen porch and eat pie, drink wine and watch the Mississippi River go by.
They will not  tell me when I will appear. They said they would give me heads up about one month ahead of print. They usually do 6 months in advance, so I figure the  first time it could appear would be summer. I am so excited. I could just bust. I will let every one know as soon as I can. Imagine me, a little farm boy from Missouri, with his house,  in a national Magazine. I just got my lastest copy and that is why I thought I would share this with you. 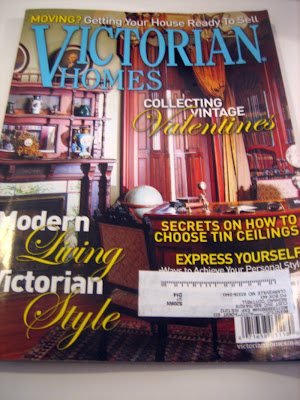 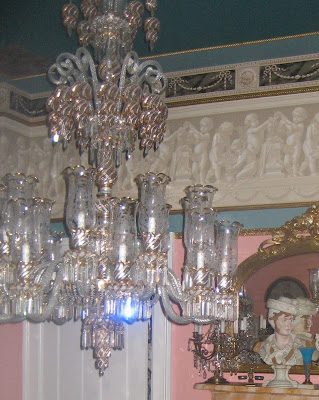 Can you believe, my family and I took 13 chandeliers apart and cleaned them , put them back together and did not break one piece. It was a miracle.And I made the announcement that, that was the last time, they will ever be clean. Well unless another magazine calls.
Posted by Richard Cottrell at 2:47 PM 7 comments:

Marblizing or Faux  Marbling, is the preperation  and finishing of a surface ,to imitate the appearance ,of polished marble. Faux marbling is a special case of faux painting ,used to create the distinctive and varied patterns of marble,the most imitated stone.
First used in Pompeii, but really took off in Europe during the Renaissance.
The Italian school of faux painting was loose and artistic, while the French, was formal and realistist. True marblizing should be so good that people frequently are unable to distinguish the real from the false. The techniques were perfected by the 17th century and have been used in all style of construction, well into the 20th century.
The art of Marbling reached its apogee between 1845 and 1870. Some of the best examples are found in Buckingham Palace,where the pillars in the Emperors Room, were done to perfection and  imitate marble. Most visitors are amazed when told they are faux.
It is a process of layering tinted transparent glaze over a base coat, to create a marble like look. The glaze is manipulated while still wet, to form patterns and textures. Feathers were often used to paint the veins.
About three houses ago, I visited the Missouri Governors Mansion in Jefferson City, Mo. The Double parlor was seperated by 4 floor to ceiling columns, that had been marbled. I was so taken by the look, I came home and wanted some in my own home. After calling several local faux artist and getting bids to have some marblizine done, I soon found that I could not afford it. So being an Artist, I did gradulate with a BSE degee in Art from Missouri Univeristy, I thought, I am going to have to do it myself. I bought a book, and read up on the techniques. I went to the hardware store and bought some paint, glaze and a sea spoonge and I sat down with a piece of real marble ,close by and started out. I have learned through the years and each project seems to get easier and a little better. I think I do the Italian version, as mine is more loose and artistic. 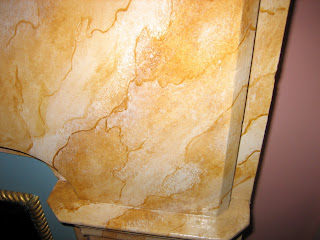 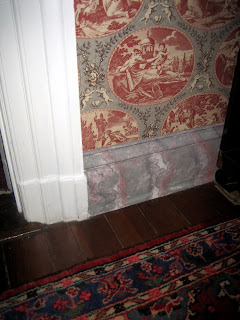 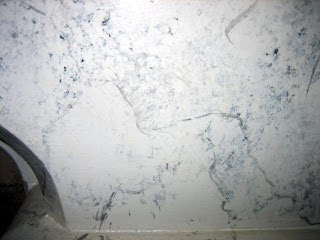 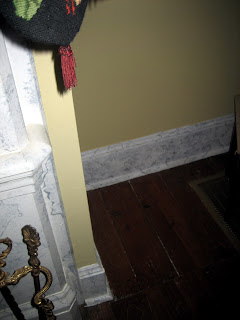 In this post I will share with you the projects that I have done at My Old Historic House. The Dining Room mantle and baseboards, Down River Parlor Mantle and baseboards, The baseboard in the Entrance Hall and the top of a large gold gilt Pier Table in the Up River Parlor. I have also added some photos of the mantle in the Up River Parlor, which is the real thing,  so you can compare the real one to the Faux.
If you have time and feel like it, please drop by my online store after you are finished with this blog. Just click, http://www.richadsgreatstuff.etsy.com/
Thanks for stopping by. Come visit any time. I will leave the light on and Sissy Girl will meet you  at the door with a jump and a kiss.
Posted by Richard Cottrell at 8:58 AM 5 comments: