American Empire,  is a French inspired, Neoclassical Style of American furniture, that takes it's name and orginates from the Empire Style, introduced during the First French Empire period, under Napolean's Rule.  It gained it's greatest popularity in the US after 1820 and is considered the second,most robust phase of the Neoclassical Style, which earlier had been expresses in the Adams Style in Britian and the Louis XVI, in France. As an early-19th century design movement, in the US, it encompassed architecture,furniture and decorative arts, as well as the visual arts. Often referred to as the Grecian Style, generally displayed plainer surfaces, in curved forms,highly figured mahogany vaneer and sometimes gilt decorations.
True Empire American can sometimes be mistaken with a latter stlye, known as Empire Revival. This movement took place in the latter part of the 19th century. It was most often, made of Oak and was far heavier in form than the real American Empire Period. These pieces were usually  dining room buffets and bed room chest and dressers. Once you see the difference in the two styles there is no comparison.But, both had there place in history.
The American Empire period, lasted from 1820-1840. Some pieces were made after that, but the greatest amount were produced in those earlier years. Most pieces were made in American and the  best factories were found in New York and Philladelphia.
﻿﻿﻿
﻿
﻿ ﻿﻿﻿
﻿﻿
﻿﻿ 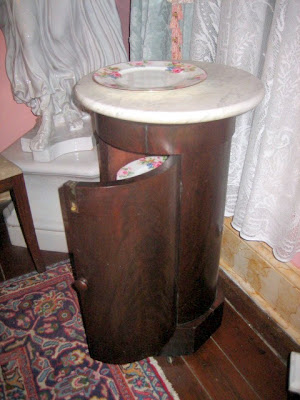 The little cabinet that I am  showing to day, is not as common as most, and some might even call it a rarity. It is a Plate Stand or Cabinet. Some people confuse  this with a commode, used in the bed room, but this one, is for sure a dining room piece ,made for plates. It is made of solid mahogany and is true to the simple form. It is just the perfect size for  10 to 12 inch dinner plates. The curved door is hinged and when open, gives ample room to fill and remove the plates. It is American and has a white Italian marble top. Tiny brass rollers make it easier to move about. This would be placed in the dining room and would make plates available to the servants or the Mistress of the house.
I am sure in it's day, the top would have been left empty, so plates could be placed there, as they were being moved about. I chose to use it as a pedestal, as true to most Victorian Home people, I have more stuff than places to put it. I keep one of my glass parlor domes on mine. The dome is full of wax flowers and they are held in place, with a French wire basket, that has been dipped in wax.
I sometimes rent, My Old Historic House, for parties, and I need lots of plates. They are not always easy to store in between uses, so this little gem, sure comes in handy.
Posted by Richard Cottrell at 8:55 AM 5 comments: