The term sofa,couch,lounge,divan,tete-a-tete,settee,sociables or love seat, all seem to have different meanings, especially in different parts of the world. We Americans, are the ones, that came up with the term,"love seat." A far cry from the French word,"canapes' or the Italian expression, "sociables." Leave it to the American's, to get right to it. Two people on one seat,"love seat." Some how it is not as romantic sounding, even if the world,"love", is attached.

The defination of Settee is, a long seat with a back. Usually seats two. A medium sized sofa,with upholstered seat with back and arms. I found no defination for  love seat. In the furniture and decorator world, the term means a two seat sofa or couch. Some would say, smaller couch.
Different types of settees were given different names deriving from there function. To me the most beautiful name is the one the French have used for years to name the  love seat,"Canape'. The name sofa is from the Arbic world,"suffah.".Settees originally came from Italy. Today the sofa or settee in Italy is commonly called a sociable. We owe much of our interior design and decoration trends to Italy. I have always said, they were and still are, the father of interior design. After Italy the sofa moved on to France where it flourished. To make it more comfortable for seating, fabric  and padding was added and the button tufting technique was invented. The French world for sofa, love seat is ,"Canape" Soon the sofa trend made it's way to America. The early Federal and Empire period found them to be stiff, straight and with out much decoration. The American Rococo period,1840-1890, brought the French influence to America.
American Rococo is the name for one of the great international ornamental styles of the 18th and 19th century. The  emphasis was on naturalistic ornament carved and engraved. This movement started in New York and Philadelphia and latter moved to New Orleans and finally Grand Rapids. Rococo, sometimes called the Antique-French style, because of it's origins in 18th century France. The American Rococo style has become the American's version of French's Louis XV. The most recognized of the Romantic Revials with complex curves,r-scrolls, the furniture of the reign of Louis XV's , reigned supreme in America in the 18th and 19th century. 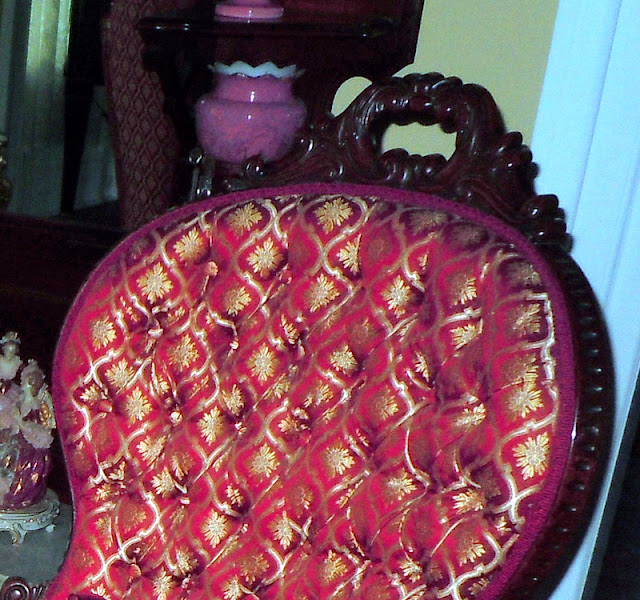 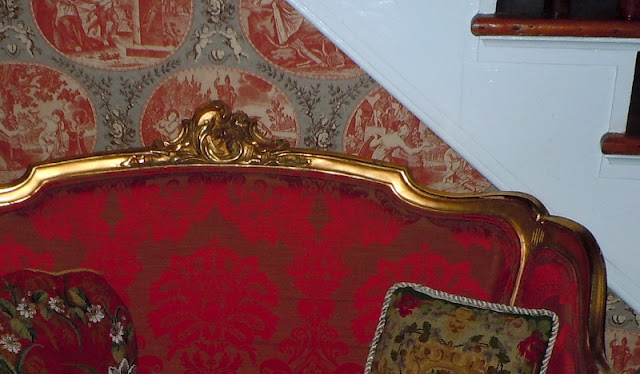 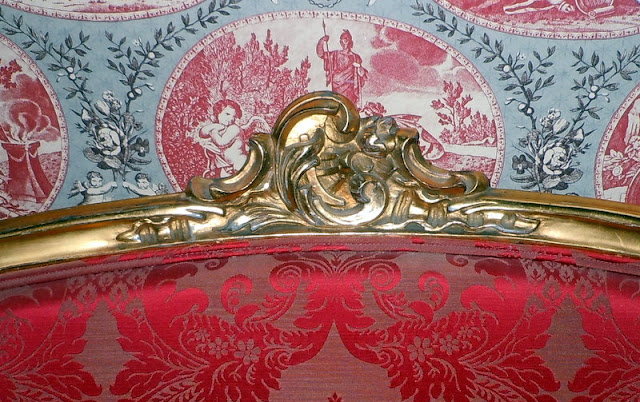 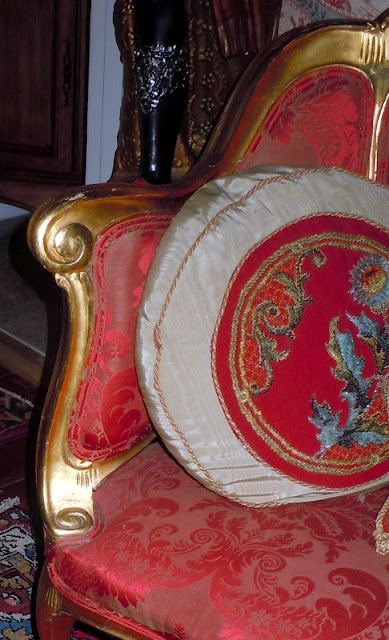 The Rococo furniture soon became mass produced in New York,Cincinnati ,Grand Rapids and New Orleans. Makers like Alexander Roux, from France, working in New York. John Henry Belter, who patented a process of laminating and steam bending wood. Joseph Meeks , and Mitchell and Romensburg,  in New York and Prudence Mallard in New Orleans. All were leading makers and  designers of the American Rococo Revial Style. No longer did Americans have to travel to France and Italy and import fine furniture to America. It was made and sold in almost every major city after 1840.
The,"Sociable." was a settee with a low back, flanked by two chair seats on each side ,going in the opposite direction. This was soon to be called in America, A Courting Sofa., with a built in Chaperone in the center, it was safe for a young lady and a gentleman, to be seated, in public, together, with out a scandal.
Rococo referred to as, "late Baroque", 18th century style developed as Baroque artist became increasing  ornate. The world Rococo is seen as a combination of the French word,"Rocaille", meaning skill, due to reliance  of artists,on these objects, to produce decorations, and the refined and fanciful style of the 18th century. Rococo is now widely recognized as a major period in art and design.
After Rococo, the French Louis Seize Revial Style, soon took over Europe and American. This form was more sever and straight in lines. The squared off lines, backs, seats and arms, were far more simple. This is a style that is very popular in the world of interior design today. It is a simpler, cleaner look and much easier to live with. It was well known for its painted pieces and they are highly sought after by collectors today. 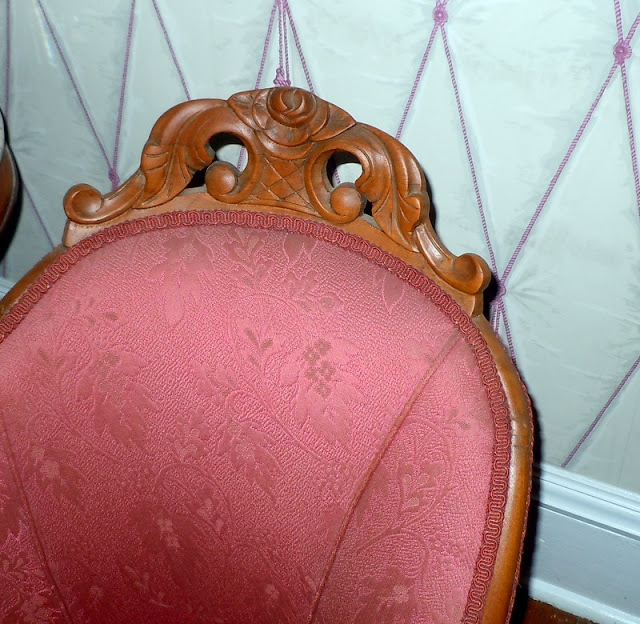 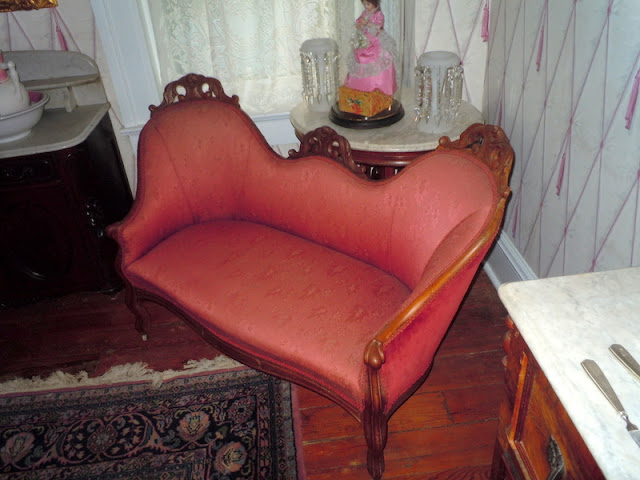 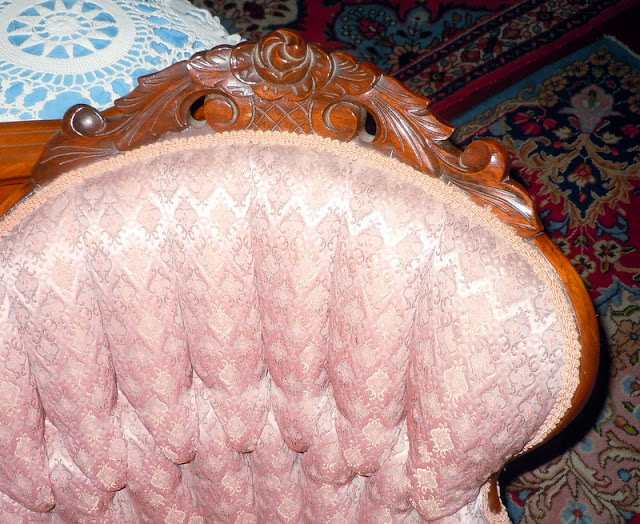 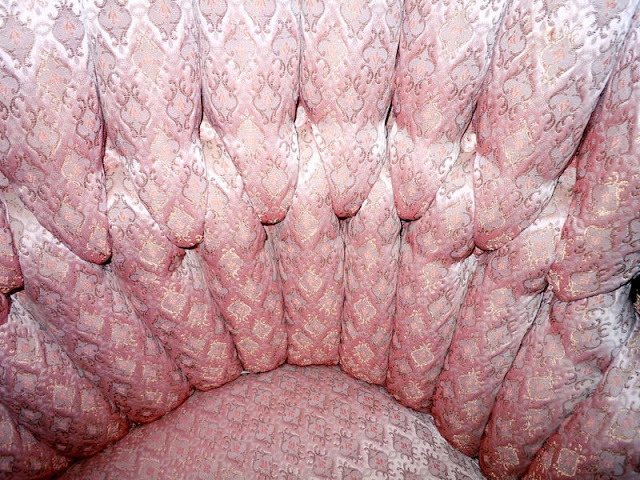 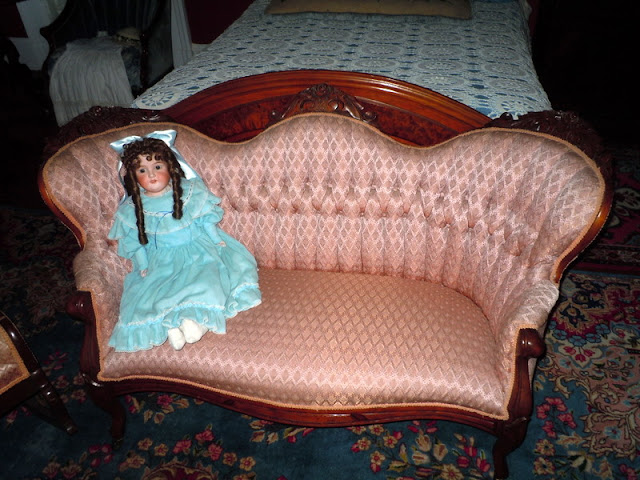 The Rococo Revial is my style of choice. I have been in love with it for many years. I love the soft curves, carving, button tufting and the Cabriole leg. Most pieces made in America are of Walnut wood. Sometimes you find pieces of rare rosewood. The earlier pieces were almost always done in black horsehair. That trend soon gave way for velvet and damask. Since, My Old Historic House, was started in 1845, with and 1860 addition, I have tried to fill it with furniture of that period. Most of the furniture in my collection is American and of the Rococo period.. I do have a couple of pieces of French, and a small sampling of English. All the furniture is from the 1840-1860 era. Mr. Elgin, who built my house, was a river boat Captain and I am sure he had access to fine things. I have found in my studies, that most American Homes ,of this period, were furnished with American made furniture. The decorative accessories were another story, usually imported from  the owners, "Grand Tour", of Europe. I have tried to stay true to this  ,when filling my Historic home.    I have to say, I fit right in with the rest of my American friends and neighbors and call my little couches, LOVE SEATS. I have for so long, it just comes natural. At least every one knows what I am talking about, when I say, that love seat, right over there. The love seats I am sharing with you today ,are all American, except the gold one, and it is French. It comes to me by way of the 1904 Worlds fair, that was held in St.Louis. The Mayor of St.Louis at the time, David R. Francis, and host of the fair, had a farm in the country, right beside the farm I grew up on.. When I was a young kid, I mowed the yard for his Grandson. When they sold the farm in 1995, there was an Estate auction and I bought this French Love Seat. Mr. Francis said it was from the French Pavillion at the Worlds  Fair. The large Chinese vase beside it, was also to have been at that fair.
The gold gilt love seat, is true to the Louis XV style.
I hope you enjoy this little lesson on small sofas, also known as a love seats. I have a passion for them and want to buy every one I see. I just want to hug them.But alas, room  has run out, and I am afraid, there will be no more. Please come by some time really soon, for a real tour. I will leave the lights on . And  you can see which love seat is  your favorite? Oh yes, Sissy Dog will always meet you with a jump and a Kiss. 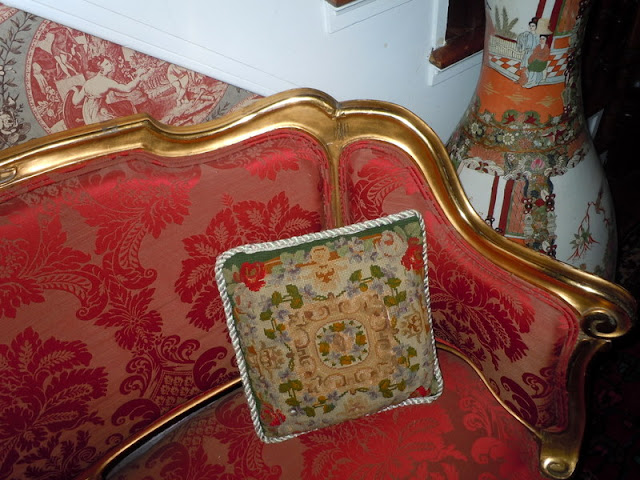 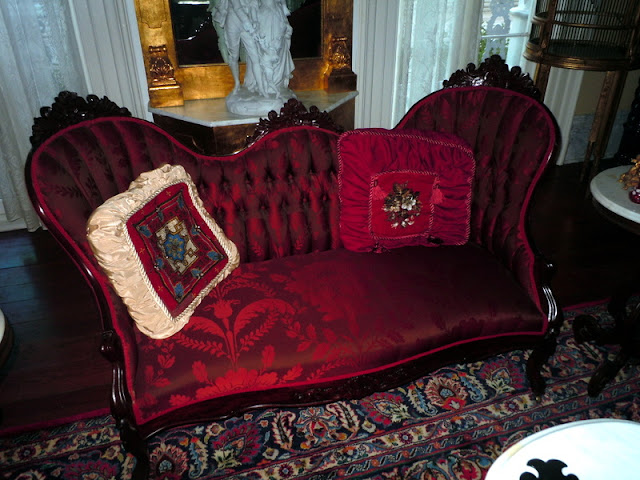 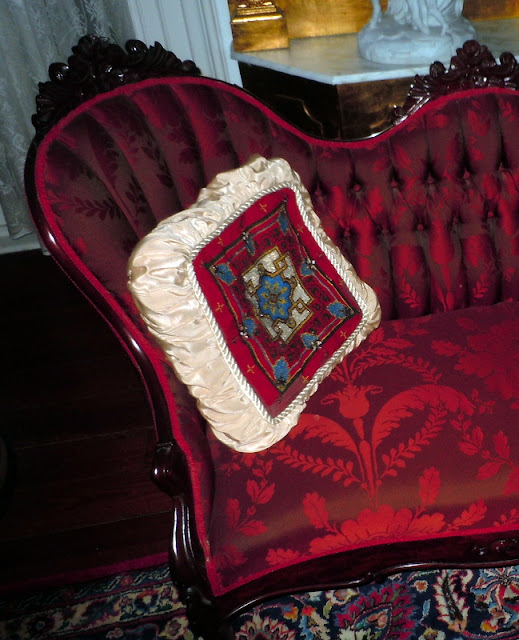 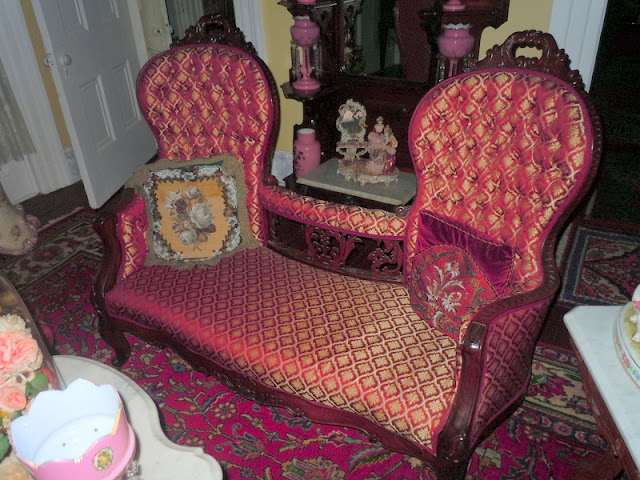 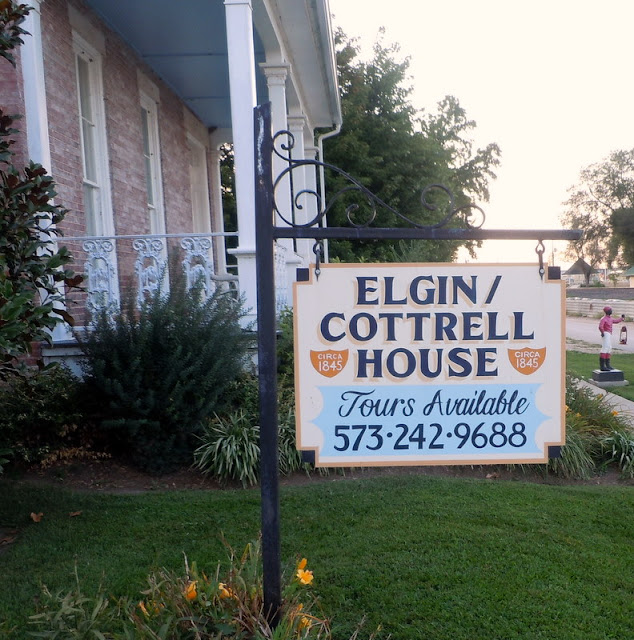 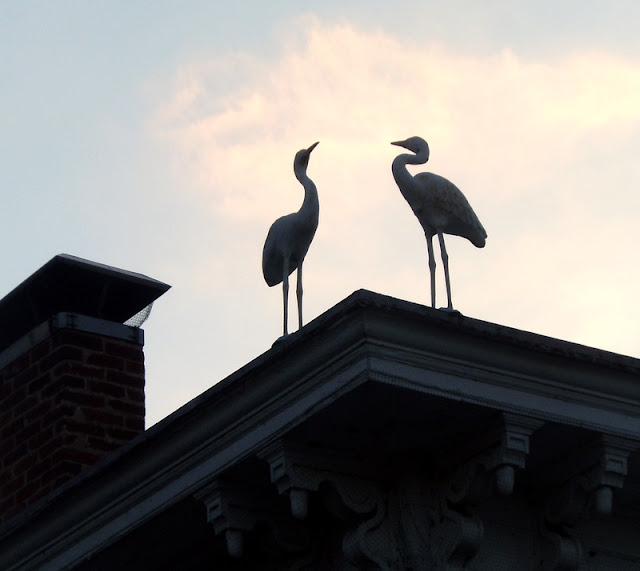 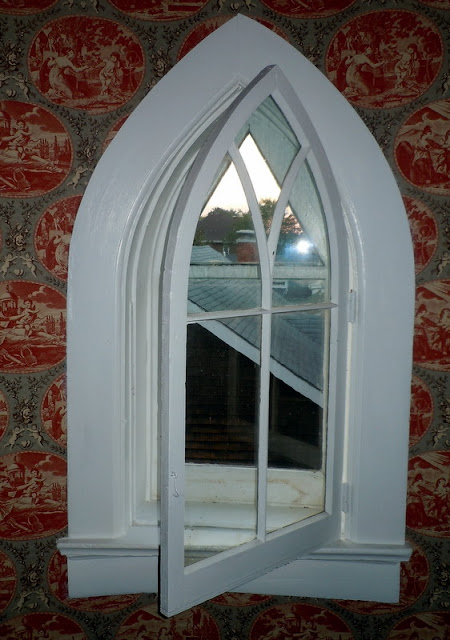