It Only Took Four Years to find the All.

When I bought,My Old Historic House, AKA, The 1845 Historic Elgin/Cottrell House Museum,in the spring of 2007,  I was no novice to Victorian home rentavation and decorating. This would make my 5th house of that nature. This house, however, was to be my final project,my swan song and the cream of the crop. I was 57 years old and took on a 30 year loan. What was I thinking, most of my family and friends would say. I said, "I,m in Love." I was like a child at Christmas, making lists and checking them twice. I had energy I never knew I had. I was living and working in St.Louis at the time. My weekens were all devoted to My Old Historic House. I could work 20 hour days and never seemed to  get tired. Of course all week at my antique business Iwould set around and moan.Things just could not happen fast enough. I was on a mission and I was determined to."Get Er Done."
When I bought this house,I had  three pair of Victorian Pressed Brass window Cornices,pelments,valances, or what ever one might call them. I had these for years. I   bought them at a Antique mall in St.Louis. I had used them in many houses. In the past,I have had all sorts of them. But I would sell them off or be forced to leave them in a house when I would sell it. But, I knew I wanted brass cornices like these for the entire old house I was working on. So I started a quest to find enough to do the windows in this  house, and that quest, took 4 years.
Cornices like these were the height of Victorian Window fashion in and around the 1860's. They were made of  thin brass sheets that had been pressed onto a wood or plaster mold. The molds were hand carved and were used over and over. These were made in running feet and cut into 12 inches section. The sheets of brass were overlapped like the seams of wallpaper, and they would be matched up so the length could be adjusted. They were nailed to strips of wood and held to the window with metal brackets. The purpose was to cover the window mechians  like rods  and  pockets. They were made in such the same way that tin ceiling panels were. They could be made longer by adding pieces and the ends were bent  to go   around the curtain rods. They also added decoration and bling to a room. The Victorians were all about bling, and they were the inventers of the phrase,"more is better."
I wanted to decorate this house to the 1860 appearance, so brass cornices were a must. So,I went on a mission to find them. I looked on ebay everyday. I found them listed under cornice,brass cornice,valance, brass valance, pelment and many other ways. I bid on lots of them, some I did not get, as I did not have the money to pay the price.Others I won and slowly I began to build up my collection to fill the windows of this house. 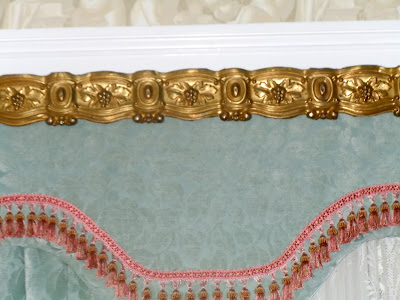 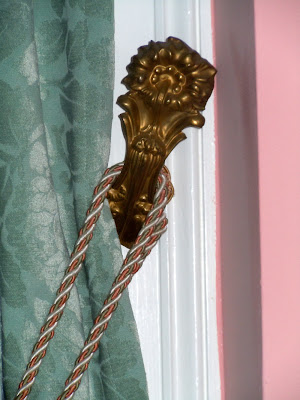 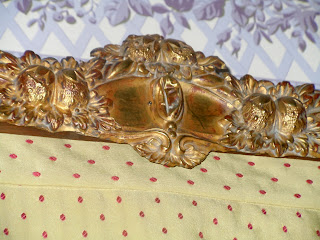 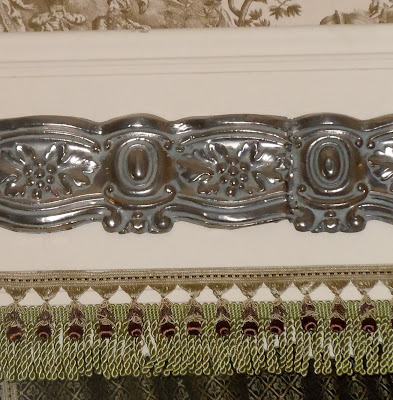 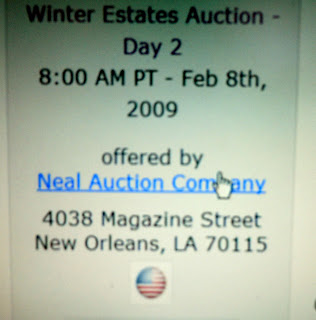 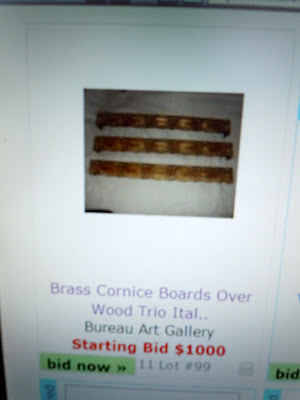 The thee that I had to start out with,I used in the master bed room. The problem with them was, I only had 3 and the room had 4 windows. They stayed like that, with one window plain for at least 2 years. After looking all over the world, I found the one I needed, right here in Clarksville at a local garage sale for $40.00. I could not believe my eyes, neither could I believe the price. I could not believe they were asking  that much for it, when they were not even aware of what it was. But, at the same time that price was very cheap. And the amazing thing was it was a match to the other three. Never know what might be in your own back yard.
My quest was over- that was the one I needed to complete the collection.Now what's next ????
I did a little research and came up with some for sale at auctions and on Craigs List. They are not bargins. There is none on ebay today, but who knows about tomorrow. I am sure if look hard and long enough you can find some out there somewhere.
Drop by for a tour anytime, I will leave the lights on and Sissy will meet you with a jump and a kiss. ENJOY!!!!
Posted by Richard Cottrell at 9:06 AM 14 comments: