The state of Missouri ,where I live and abide,has a beautiful old Governors Mansion. It was built in 1870 and was built for the purpose, of the home to the Missouri Governor. Most states Governors mansions were built as private homes and then sold to the state ,for use as the home to the Governor and his family. Missouri is one of the few house that were built just as the governors home. This mansion sets high on a hill over looking the Missouri River and is in our state capital town of Jefferson City.It is about 2 and 1/2 hours from my little town of Clarksville,Mo. I have read and seen many books on the mansion. It  has a nice web site with pictures and history. For years I have wanted to go take a tour. The tour is free, but for some reason I just have not taken the time and made the effort to go. Sunday past ,my friend Donna, asked me if I would like to do something together on my day off. We both agreed it would be a fun thing to do, so we called our friend Kay ,who lives in Jefferson City and the three of us made plans to go visit the mansion and have lunch.
After several days, which seemed like weeks, it was not  too hot in Missouri, only 90 as compared to the 104-108  temperatures that we have been experiencing.So on Tuesday morning, July 9th,bright and early, we hit the road for our big adventure. I was so excited to finally see and walk into this house that I knew so well from pictures and books,that was all I talked about on the ride up there. Donna said I could probably give a better tour than the tour guide. I laughed and said she was probably right. When we arrived we were a few minutes early and Kay was not there yet. So we went into the yard and looked around. I started telling Donna all about the porch columns on the entrance porch, the huge double front doors and the fountain outside in the courtyard. When Kay arrived and we started the tour, the first words out of the tour guides mouth were about the doors, columns and fountain. Donna looked and me and we both smiled. 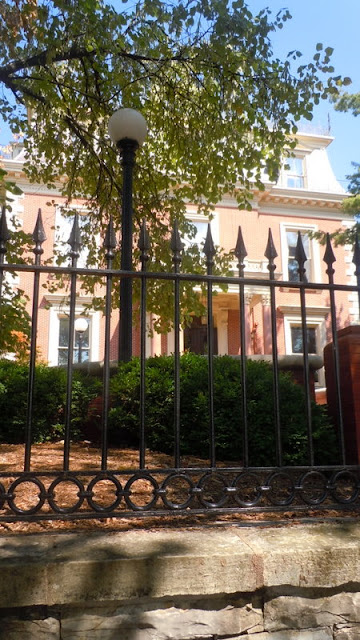 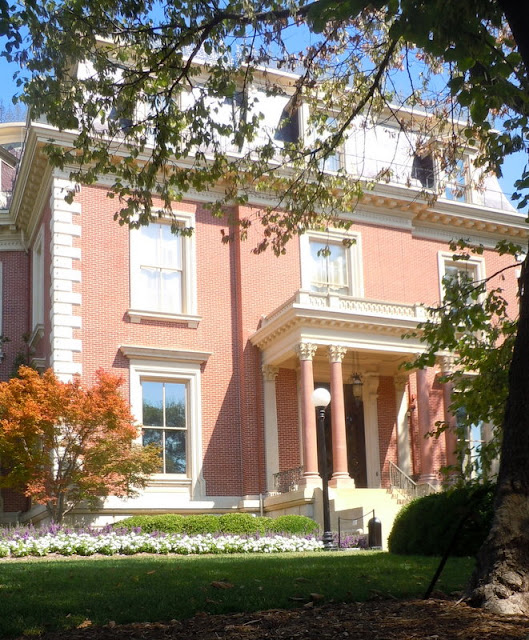 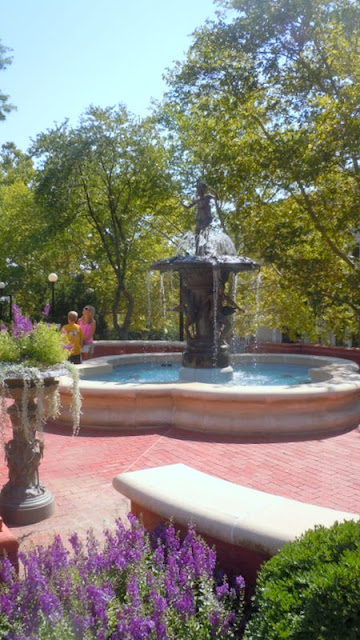 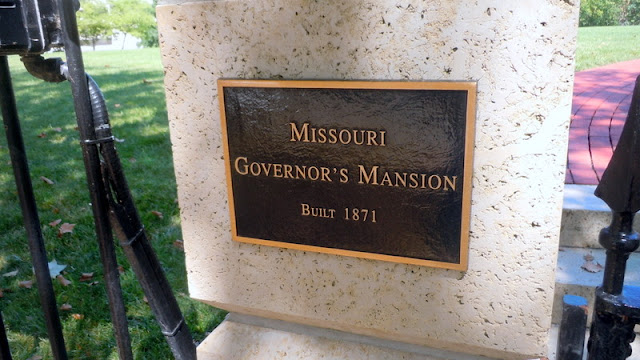 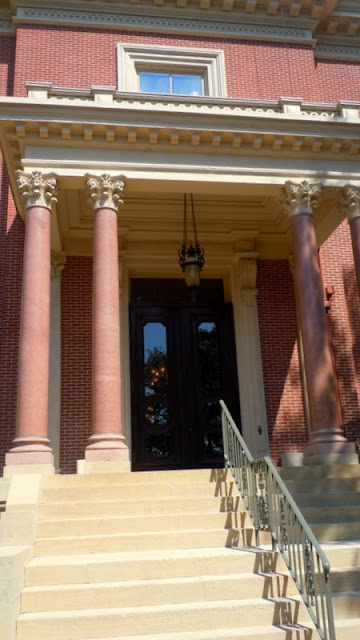 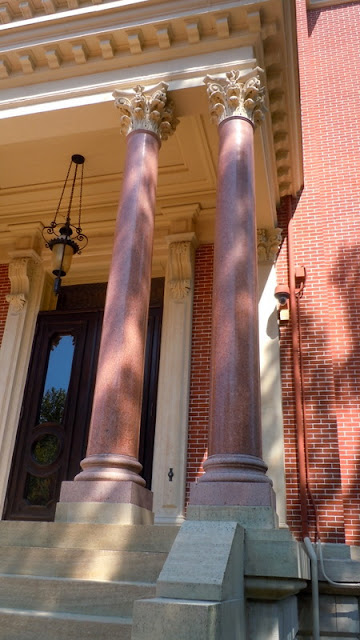 Then we went to the mansion and my mouth flew open, as all the furniture and window treatments were out of the mansion. They had been sent out to be redone and recovered. I was just sick. All we got to see were big empty rooms. They were beautiful rooms, but for the most part empty. The rooms did have a lot of portraits of the first ladies. It was fun to see them, in the many different styles and ages, from the very oldest to the newest. I have known several of the first ladies personally, for various reasons. My friend and lawyer in St.Louis, father was governor and her mother a first lady.  Two families have strong connections to Pike County,Mo. where I live, as they were from here. I went to school  with some of there descendants.I also worked with a couple of them ,when I had my shop in St. Louis, when they were looking for certain pieces for the mansion. Some of which I helped them find.
The Governors Mansion is what is known as Second Empire style.  Some call is Renaissance Revival. It was designed by a St.Louis Architect  and built in 1870. The first Governor to move in was Governor Brown in the winter of 1870.The brick for the house was hand made in Missouri and the walnut wood for the wood work and floors was also from Missouri. Each Governor, from the very first to live there, has given the mansion a gift, some where mirrors, furniture,piano's and chandeliers. In the  late 1980's the house was in very bad repair. Governor Kit Bond, who latter went on to became a Missouri Senator was living in the mansion at that time. It was his wife who started a program to preserve the house and its furnishings. A trust was started and is still in place. The mansion owes a lot to Mrs. Bond. 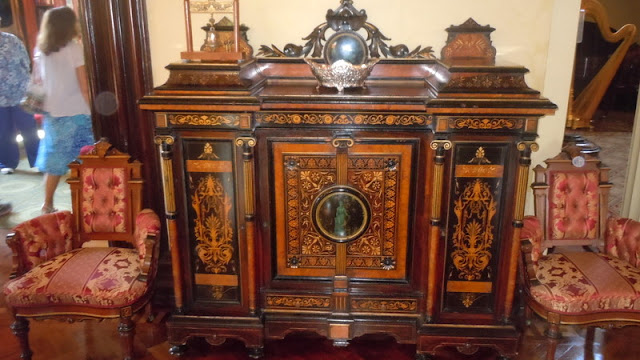 The house is going through a major  repair cycle at this time. The windows were all replaced with new, double plane glass. The brick was cleaned and tuck pointed. The slate roof replaced and the electric, heating and cooling was all up dated. This was all thanks to over 3 million dollars in donations. It is a grand home and well fit for a Governor and his wife, the first lady. I, as Missourian, am very proud of it. I am so glad it has been saved and preserved for future generations of Missourians to enjoy. I think one of the former first ladies said it best, when she said, that the mansion is a hand clasp of history, enjoyed and shared by all Missourians and others as well. I hope to go back soon and see it put back together. It only took 62 years to get there the first time, so I don't know for sure if I will every make it back. I sure hope so,
In the mean time, come visit me at another Missouri Mansion, My House. The 1845 Historic Elgin/Cottrell House Museum here  in Clarksville,Mo. I will always leave the lights on and Sissy will meet you at the door with a jump and a kiss. And we have furniture and curtains. Heck ,some people even say my house is prettier. I'd like to thank so. In the mean time,  I hope you enjoyed your tour of the Peoples," Mansion of Missouri." 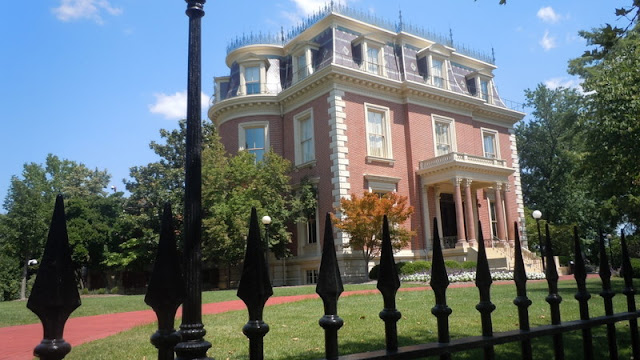 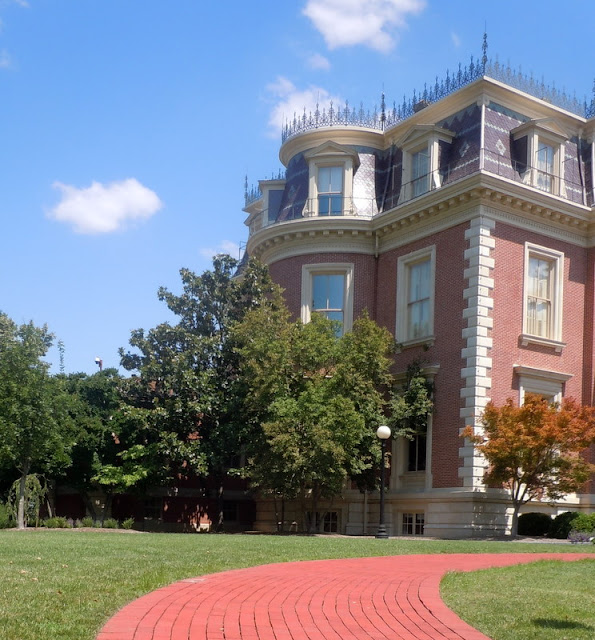