Hour and Half till Dinner/Not quite Downton Abby!

I have 3 friends that I often go out to dinner with here in the country on Saturday nights. We used to always go to the golf course here in town. Eagles Bluff is a beautiful golf course, 18 holes, and we are so lucky to have it in our little town of 400 people. I have never played golf, not my style, but the club house is lovely and on weekends it was open to the public. It was a casual place and the food was down home, comfort and affordable. Well they have closed for the winter season and that has left us without a place to go. We tried several other places, but was not the same. For the past couple of weeks I have just opted not to even go. Yesterday my friends came in and asked  if I wanted to dine out and the notion hit me, for us to dine at, My Old Historic House. Well this was around noon and I had to work in the shop till five, so I said about 6:30. They all agreed.

Clarksville, my little town, has no grocery store. The nearest is 30 miles, one way, from here. We do have a gas station/quick shop. It is small and limited. I had planned to make mac and cheese  this week, so I had most things needed for that. I always use cream of mushroom soup in my cheese  sauce and I did not have any. So to the gas station I went, they had a can, off brand, had to do. I make mac and cheese kinda as a complete meal. I add chunks of ham or in this case hot dogs.I had the slim makings of a salad and needed a desert. I asked my guest to come up with that. They have a home in Louisiana,Mo. 8 miles away. Where it has no grocery store either, it does have a Dairy Queen, Dollar Store and larger Quick Shops. I'll show you the desert latter! 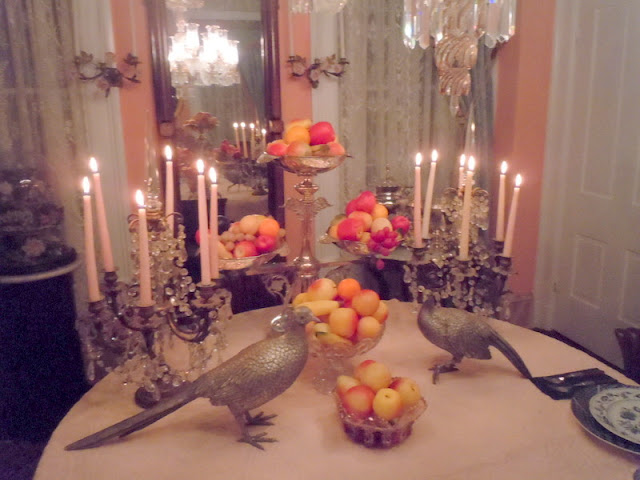 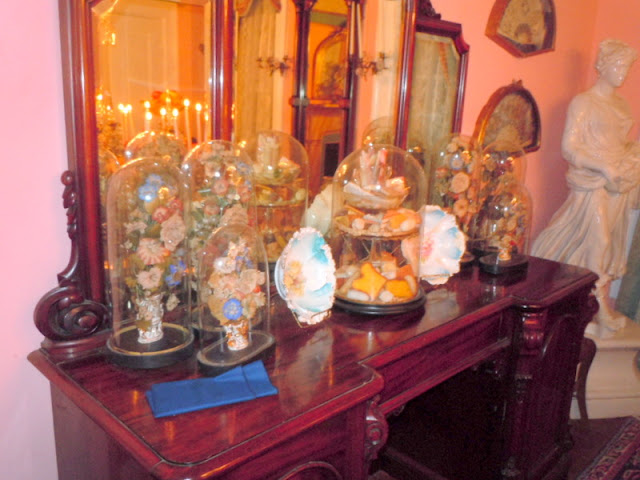 At 5:00 I hurried home from the shop. I live two blocks away. I  go several blocks, round about as I use that walk and time for Ms. Sissy, well you know why! As soon as we made it home, I feed her and lite the fire place in the kitchen( gas log) and shut the dinning room door. I just finished reading a book about Alminia, Countess of Carnarvan,of Highclere Castle. Highclere is the English country home that Downton Abby, the Masterpiece mini series is based on. Highclere was built in 1849 and has 100 rooms. At that time, central heat was not heard of, especially in a country house, of that size. The book  describes in great detail about when  Alminia was first married to the Count of Carnarvon and moved to Highclere. She was used to a more modest sized home that was warm.. She tells of how cold it was, and how only a few rooms were used in winter and she wore her fur coats in the house. Well, My Old Historic House,  does not have 100 rooms, only 14, but in winter it is cold. I have central heat, but the cost to run is more than I can afford. So I too, live in only a few rooms and often wear my coat, not fur, To warm up the dinning room for my last minute dinner party, I use the kitchen fire place and shut the dining room door. This takes a few minutes, that is why that was done first.

Since I was having a guest that had never been to my home, I wanted to make it as special as I could, serving mac and cheese with hot dogs.I asked myself, what would Alminia do?? So I moved the French bronze and crystal candelabra from the mantle to the table, replaced the candles with fresh ones , dinner would be by candle light .I set the table with nice china and had full intentions to go to the yard and pick some magnolia leaves for added inspiration. Time was against me, as remember, I only had  one and half hours to cook and pull this together, And there is no staff at, My Old Historic House. Alminia had over 50 servants are her beck and call. I barely had time to throw the junk that was on the dining room table, upstairs in the closet.

My guest arrived and wearing there coats, we had a fast tour of the two parlors, and then into the warm  dinning room and kitchen. As I finished our  dinner , mac  and cheese needed a little more oven time,we all gathered around the fire. Finally it was done and to the dinning room we went. I wear about 5 layers of cloths in winter, by this time, the fire was starting to really warm the house, so as I excused myself, off came a few layers. Kinda seems like a comedy almost at this point.
We dined on mac and cheese with hot dogs and salad. We had water and no bread. Alminia, Countess of Carnarvon, would  had to have smelling sauce.And for desert, Little Debbie's, right out of the box. I thought latter, I should have at least placed them on a silver tray.But we had good conversation and it was warm, after all. 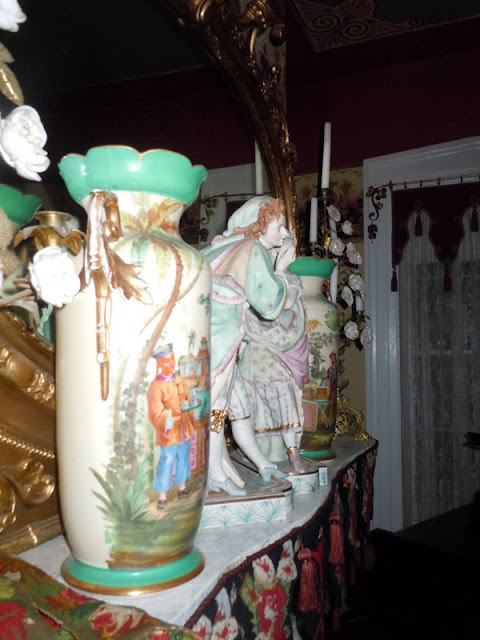 My guest left and I was left with a pile of dirty dishes. I rang for the staff, but no one came. Where was Mrs. Hughs when I needed her??? I washed them up, turned off the fireplace , replaced the  candelabra to the mantle, enjoyed the smoke rising as I blew them out.Went out for Ms. Sissy's last walk and was surprised to see we had a nice beautiful snow. All in all, I felt like it was another successful event at, My Old Historic House. Come by any time. Give me at least and hour and half and I'll fix us something to eat. Sissy will always meet you with a jump and a kiss, but I can't always promise you snow!! 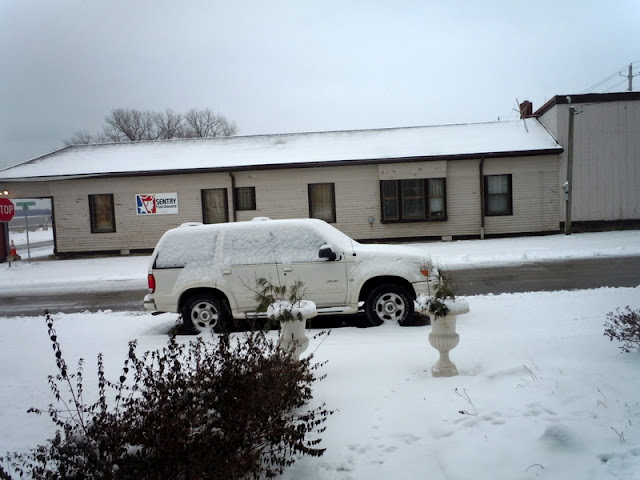 Posted by Richard Cottrell at 9:08 AM 22 comments: