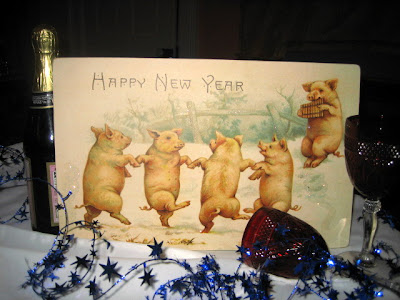 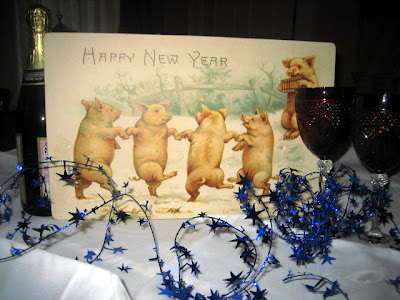 Posted by Richard Cottrell at 2:41 PM No comments:

Images of the Past 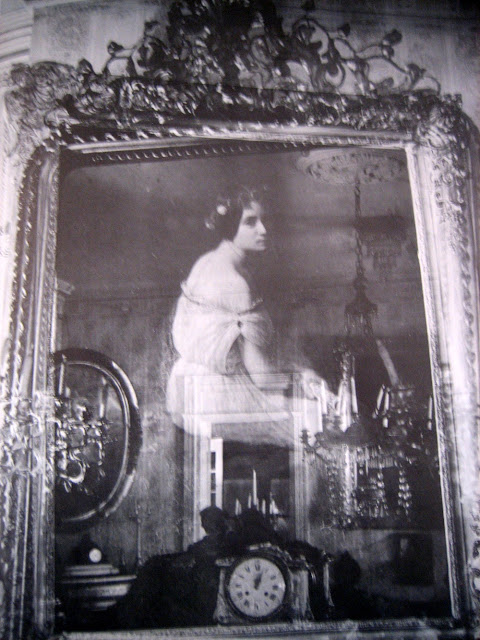 Some times, when you are just in the right spirit, and you pier into a mirror, you can see images of the past. Perhaps, this is Elizabeth Mountjoy Elgin, in her parlor ,at the 1845 Elgin / Cottrell House, Mirror. Perhaps. Just Perhaps!
Posted by Richard Cottrell at 11:11 AM 4 comments:

Mirror - Mirror On The Wall

Mirrors,Mirrors, everywhere, that was the norm for an American ,Ante- Bellum home, before the Civil War. Imported from France and made in America,mirrors, were widly used in the decor of that day.
The defination of a mirror, is a sheet of glass ,coated on it's back ,with silver, to produce images, by reflection.The first mirrors were metal, made during the Middle Ages.They were highly polished to reflect light.In the 16th century, Italians made mirrors, with sheets of glass ,with polished metal sheets on the back. They could  not be very big, and they were heavy. The chemical process of coating a glass surface ,with metallic silver, was discovered in 1835. This is the modern day way to make mirrors. Mirrors have a long history of use as household objects of decoration.New cheaper techniques in the 19th century, led to a great profiferation in their use. Not only were they hung on walls, but were incorporated into pieces of furniture.Improved skills in mirror making also made it possible to use large sheets of mirror, for over the mantles and the popular pier mirrors.
Mirrors over fireplace mantles,(Over the mantle Mirrors) and Pier Mirrors between two windows were popular in most Victorian homes. The purpose of these mirrors was three fold. One, to reflect light, most houses of that period were lite with candles or whale oil. Gas  and oil lamps were used late in the period. None of the above produced great light, so the mirrors would make the rooms brighter. Two, the Pier mirrors between two windows, made the room to appear bigger. It seemed to continue on. They also reflected the light. Three,the mirrors were so very beautiful and added so much style and grace to a homes interior.If you wanted to show you were a man of means, the way to do that ,was  your home. And a home with mirrors everywhere, was a home of a man of means,indeed. Gold Gilt, didn't hurt, either.
Over the years I have somehow managed to amase a collect of mirrors for my old Historic House. Some were raised from near death, others were as  beautiful as the day when they were first made. The Over The Mantle in my Up River Parlor came from a fine home in StLouis. It was in my Antique shop there, untill I purchased this home, and then I had to keep it. It has only 3 inches to spare , even though my ceilings are 12 feet. I measured and meaured, and finally, my carpenter and I, just hiked it up there. I have giving most of my mirrors a gold leafing. Using sheets of gold leaf and a soft brush. The same manner in which they were first made.Some like the original finish, but me, I like them to be shiny and bright, like when the house was new.
﻿ ﻿ 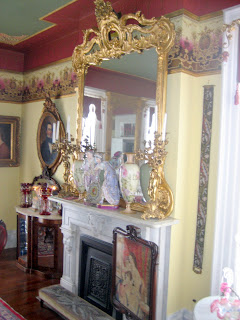 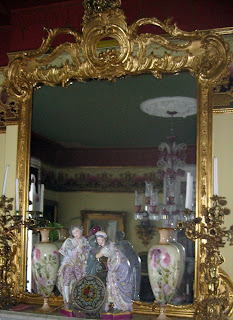 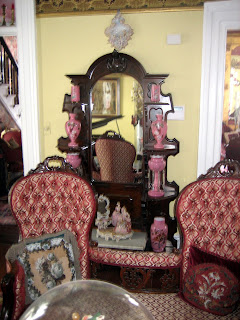 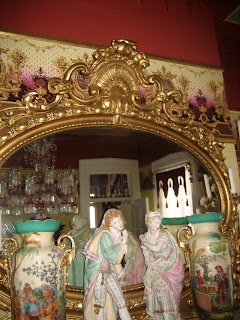 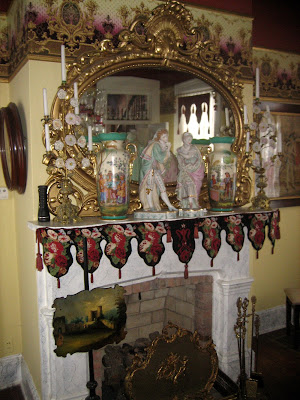 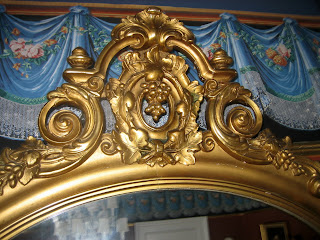 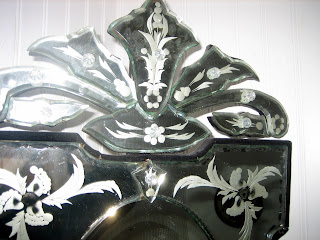 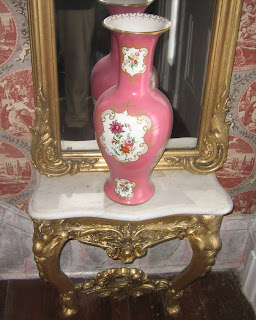 A lot of my mirrors have history, from one owner to another. But all that matters now, is that they are at home, at The Elgin/Cottrell  House, where I hope they can stay and be enjoyed by many people for lots of years to come. Drop by any time. Sissy Dog and I would love to show you around. Just give me a call. 573-242-9688.
Posted by Richard Cottrell at 10:28 AM 2 comments:

A little history behind the story of the 1845 Elgin / Cottrell House, in Clarksville,Mo.
The Elgin Family can be traced back to the Mayflower. They first settled in Virgina. Samuel Elgin, fought in the Revolutionary War, under George Washington. He married a cousin to John and Samuel Adams. In 1815, he was given a US Land Grant from President James Manroe, for 300 acres of land in the territory of Missouri. Missouri became a state in 1821. Clarksville became a town in 1821. When Elgin first arrived in Missouri ,it was mostly a wilderness. He cleared some land and made a trading post and delt mostly with the Native Americans. He had two sons. Samuel and Hazakeiah. Together they made the first road from Clarksville to St. Louis. Latter they had a River Boat, Steamwheeler and took people up and down the river. The Mississippi River is only 200 feet away from the house. Elgin and his brother developed the Missouri Mule, by breading the horse to the Donkey. They made a lot of money, during the Civil War, selling the Mules to the US Army.
It was Hazaheiah that built this house. It was started in 1845.  The bricks were hand  made right on the spot. Elgin married Elizabeth Mountjoy in 1860. She was a widow with two children and 300 more acres of land and 25 slaves. After the marriage, he built an addition to the house, in 1860, adding a second  parlor,  Master bed room and formal entrance. Several porches were used to tie the two structures together. Elgin and his wife had two more children, but both died  before the age of two. After Elgins death, the house went to his step son, Plato and step daughter, Elizabeth. The house  remained in that family for over 100 years.
When I bought the house in 2006 it was not liveable. I have spent the last four years, working to bring it back ,to its formal glory. I redid the house to the 1860 period, when Elgin lived there with his wife and was the most prosperious.
﻿

Posted by Richard Cottrell at 11:24 AM 8 comments:

What a perfect begining for the Christmas Season, a fresh fallen, white snow. I just love a White Christmas. I have been having, a little trouble getting in that Holiday  mood, but this snow is starting to bring me around.
My  Old Historic House, was built in two stages. 1845 with an 1860 addition.It was built by Hazakieah Elgin, who came to Missouri with a Land Grant from President James Manroe.The old house stayed in the Elgin Family for over one hundred years, I am the fourth owner of the house. Because it has had such few owners, it has stayed very much intact and is one of the best examples of Ante Bellum homes in Missouri.
I purchased the old house in 2007 and have been busy ever since, working to bring it back to its original glory.
When I found this house the front porch was missing and the side porches were all but  falling off. These pictures are how it looks today. 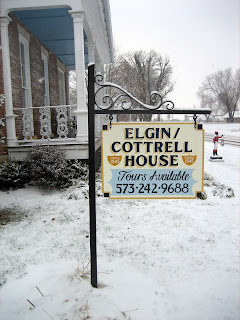 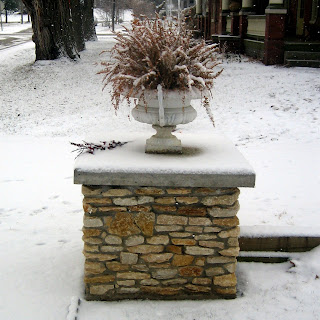 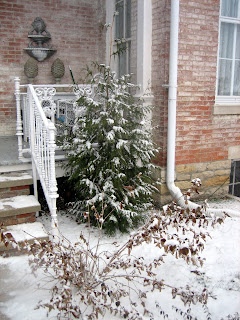 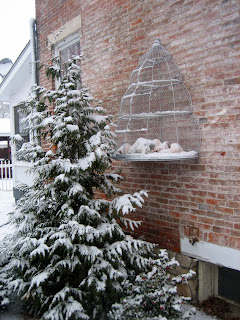 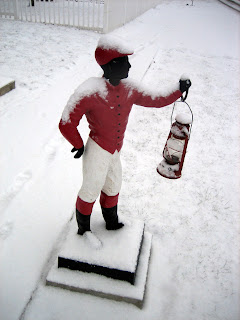 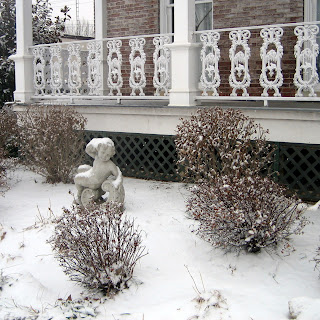 I hope you enjoy the house in the snow. And most off all ,I   hope every one has a wonderful,White Christmas and the best and Happy Year  ever!
Posted by Richard Cottrell at 9:53 AM 14 comments: