I wanted to do a beautiful post today, about my very small collection of Automatons. I wish I had a lot more, but, the price and my income has held me back. Being simi-retired, I get to buy very few  new, old,  treasures these days, but I am so very thankful that I have so many wonderful and beautiful things all around me, in My Old Historic House. My camera hates me today. I have tried everything. I even thought about throwing it in the Mississippi River out side my door. But I think the real problem is me, the operator. Some times the pictures are just really good, but today, that ain't the case.  So please forgive the pictures, I will try and do better next time.
The word Automaton means self operating machine. It is pronounced, au-tom-a-ton. The word could be used to descripe a robot. Automaton is the latinization of the Greek word,"auroyatou", meaning, acting on ones own will. It is most often today used to discripe non-electric moving machines.
18th century makers included Frenchman,Pieree Jaquet-Droz and Swissman Henri Maillardet. Belgin born John Joseph Merlin made an Automaton that was capable of drawing 4 pictures and writing 3 poems. It is now in a museum in Philadelphia.
The King of Prussia ,1745-1786, was obsessed with Automatons and he put together his armies as a well oiled clockwork  mercranism whose components were robot like warriors. 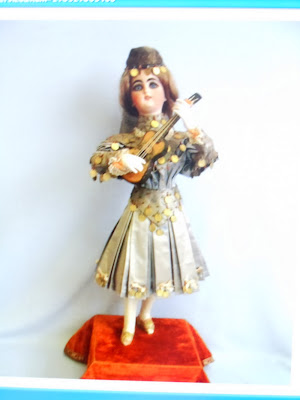 1860-1910,  is known as the Golden Age of Automatons. During this period many small family based companies of Automaton makers thrived in Paris, where   from workshops they exported thousands of clockwork automaton and mechanical signing birds. It is those Automatons that are collected today, althogh now rare and expensive they attract collectors worldwide.
If I could win the Lottery, will not happen, as I do not buy tickets, I would go mad all over the world and buy up Automatons. They can sell for over $10,000.00 and have to be handled with care. It is very hard to find some one that can repair them today. I had a really large brass bird cage with 6 birds and it had a floor stand.  I paid 4 figures for it. I messed it up and I  gave it to this clock person to work on. That was 4 years ago. I have turned him into the police, better business, and brought suit against him. Now he is no where to be found.  Come to find out he had a way about getting the best stuff to work on and then he just is no where to be found. He was brought to court for another case the other day. Mine is still pending. I believe he is in jail, but where my birds are, is another thing. Maybe I should have thrown him in the river. So be careful before you trust them to some one you do not know.
If you have any, I would love to see them,so please share. I rarely ever see one for sale in my part of the world.

Posted by Richard Cottrell at 10:18 AM

How lovely and magical, my friend!
Part of the joy of being broke is that you have time to sit back and enjoy the things you have.
I am so sorry that man conned you. Ugh! I pray he receives justice.
Any other wallpaper lying about? I love all of yours! LOL!
Kisses to Sissy!
~Andie

What a nice collection of automatons! I love the bird ones. Too expensive for me, but what a magical treasure from the past! I hope your stolen bird automaton is eventually recovered, and the thief gets some serious jail time. Have you ever visited House On The Rock in Wisconsin? Not Victorian, but the guy pieced together some very bizarre automatons that fill entire rooms!

I would dearly love an automaton, a small bird in a cage is my dream. But alas even the smallest are outside of my budget.

I love your blog!! I have learned so much from reading it.

I love the cages with the birds really well but also of course these wonderful old dolls.I have never seen one automated other than in European museums or in my doll books.Fantastic !! but there out of reach for the average collector.Sigh :-)but again I am very happy for you.

Hello Richard,
Had a chance to catch up on your blog - What a wonderful house you have!
My favorite room is the ladies' parlor, just love the colours. You kitchen treasures are also too sweet for words. My gosh, the work you have put in!
Now for your automatons; fascinating objects of the past - the bird cage is exquisite, I can only imagine how wonderful, the one with numerous birds in it, could have been. Hope you recover it one day.
Anyès
XX

What beautiful pieces you have! I especially love that bird cage! One antique shop I frequent has one that I'm always admiring when I go there. Its gorgeous and the owner once showed me how she works! I fell in love! Its a little girl holding a marionette puppet (doll) in front of her. The girl and the puppet both move to beautiful music. Thanks for sharing! Mary

Great collection ,Richard. They look so beautiful. I bet they sound wonderful too...Christine

I'm crazy for them Richard! You have such wonderful ones! That's awful that someone took your birds and ran. Thanks for the cautionary tale. I wish you COULD throw him in the river! It's the least he deserves.
I have one small german made automaton bird in a cage. Not very special or old, but he still cost me a pretty penny. Vanna

Hi Richard!!
Thank you very much for the visit to my blog... I love birdcages and yours is a treasure!

I am getting a great education from your blog! Thank you for sharing your home and world with us in your charming conversational way...it makes me smile. If you could round up that guy, I could help you dunk him in the M. R. this weekend. Just a thought.

WOW!! talk about giving you the bird!! I hope for both your sakes that guy is in jail...That's terrible Richard..but I also lost a very expensive clock the same way him and my antique clock both gone...Love your collection as always my dear friend..Hugs and smiles Gl♥ria

What a darling collection of automaton you have.
I don't know much about them ..but they are rare now I'm betting. The bluebird is way too cute.

And as for that dastardly, cheating thief....I hope he IS in jail.

And that at least someone is taking GOOD care of your little friends lovingly.

We put our money and heart into these collections..we don't deserve that kind of
disregard for our things.
On a smaller scale....I had purchased a large anitque shelf from a man who paints furniture shabby chic..and it still needed some more work done on it...which he said he would take care of.
( I was in his painting warehouse at the time) and now that I think of it... IT was probably was not his shelf to begin with.
I had left off an antique rocker of mine for him to paint as well...PAID HIM AHEAD of time...
( BIG mistake)..and I never saw those items again...I called him many times, each time he had another excuse.
Finally after two years..I actually saw him at an Antique Mall...oh my goodnes, did he ever whip out his checkbook ON THE SPOT....and paid me back...he knew exactly what he owed me..as I had told him many times over the phone. He did not wnat to risk a "scene" there and then...as there were all sorts of people around at that moment.
I went immediately to his Bank and cashed the check...luckily, it was honored. But I never did get my "stuff" back of course.